Even those who know the Baltic reasonably well will, I suspect, find it hard to place the island of Usedom immediately. For those as baffled as I was until recently, Usedom is a long sandy island which effectively blocks the mouth of the River Oder. The western two thirds are in Germany, the eastern portion in Poland. It’s a place of long beaches and old piers in seaside resorts fashionable in the Kaiser's time.  It takes an hour and a half to drive from one end to the other. The largest population centre is actually on the Polish side; the old seaside resort and important port city of Swinoujscie which also serves Szczecin up river.

The festival, though, is twenty-five years old and was originally a product of re-unification after the collapse of East Germany – like so many of Europe's festivals it was started in difficult times as a way of giving a place with complicated problems hope that Europe as a concept could lead to a more positive future.

Ironically, as one border opened another closed. Poland, reasonably accessible from East Germany, became difficult to include to reach as the European Union, with its principle of free movement, failed to extend eastward fast enough. “At first,” says the festival's Intendant, Thomas Hummel, “we only served the German part of the island but we decided to change that very quickly, even though we could not go by car – we had to cross the border on foot and it was very hard for people to come the other way. Now,” with Poland in the EU, “if you're on the beach and you wander across you don't notice the difference.” 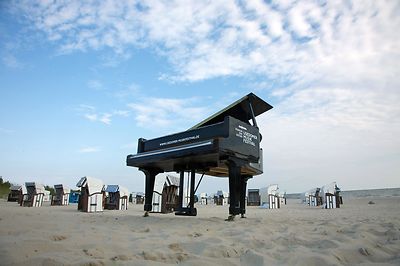 That process is a metaphor for the festival itself; using music to explore the Baltic which is now mostly open for easy travel for the first time in centuries. The region itself, Thomas says, has been slow to realise its own freedom. “We have taken a lot of time to educate people about how fantastic the other countries are. And it has been interesting to see how Russia, Finland and Estonia have reacted to the idea of the Baltic Sea Philharmonic.”

This young musicians' orchestra, conducted by Kristjan Jarvi, was founded by the Usedom Music Festival under direction of Thomas and Nord Stream AG – the gas pipeline operator through the Baltic Sea – ten years ago and is now at the heart of the festival – although it also performs throughout the region (and actually gave its first concert in Riga, Latvia). Thomas is particularly proud of the concerts the Baltic Sea Philharmonic gave five years ago with the late Kurt Masur, who had been so crucial to the peaceful removal of the Iron Curtain. When the orchestra is on Usedom, its performance venue underlines the symbolism. It plays in the turbine hall of the disused power plant at Peenemünde, at the western tip of the island. That in itself is not remarkable but Peenemünde's history in the last century is. It was where Wernher von Braun, among others, developed much of the technology for the V2 rockets that devastated London at the end of World War II and, once he had been spirited away to America, became the basis of the US ballistic missile and space programme. 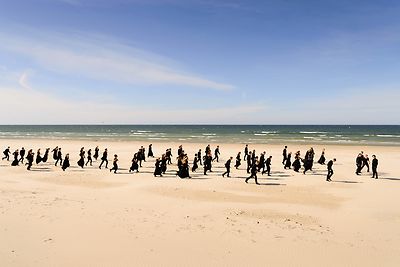 After the war Peenemünde found itself in the Russian Zone and the harbour became a major Soviet, then East German, naval port. “Ours is a coast that has been Danish, Swedish, German, Polish,” says Thomas – he could add Pomeranian or, Prussian, “so now we try to find special programmes that celebrate all the countries that share this sea together.” The point was made especially well when, in 2002, Rostropovich conducted Britten's War Requiem in the turbine hall with the BBC Choir and NDR Elbphilharmonic Orchestra as well as soloists from three different countries – Great Britain, Germany and Russia – with Mikhail Gorbachev in attendance.

The majority of the concerts are given by chamber groups from the region. “We have some fine 13th and 14th century churches and the grand halls of the 19th century hotels make excellent venues – as do the galleries and museums on the island. We've had a jazz boat sometimes as well, and we think it is important to pay attention to folk music because so much of the other music we programme is based on it.”

In most years the festival focuses on the music of one Baltic Sea country. This includes countries great and small, countries with famous musicians, and countries that are rather overshadowed by other famous figures. At the Usedom Music Festival each of these countries receives the same space, the same attention, but in 2018, being the completion of the festival's first quarter century, the programme is more general. Thomas does commission new work occasionally (for example from the Latvian composer Peteris Vasks) but he admits that is not a regular occurrence – although he does try for a special programmes that are not being done elsewhere and a balance between the mainstream and contemporary music. The artists are balanced too – in age, with young performers sharing the space with older ones like the cellist David Geringas and the mezzo-soprano Anne Sofie von Otter. There is also an injection from America, through a long-term partnership with the Young Concert Artists Trust in New York, a transatlantic bridge was initiated by Kurt Masur.

All of the island's nature, history, resorts, business and cultural scene has been combined in the Usedom Music Festival since 1994. It harnesses the economic infrastructure, lives from the support of the community and business-people, the attraction of an idyllic rural setting. It continues to write the island’s story, while acknowledging – in the form of the Peenemünde concerts – the heavy legacy. The Usedom Music Festival draws strength from what the island was and simultaneously gives it strength for what it will and can be. 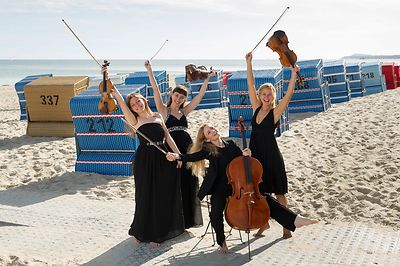 “I see the Usedom Music Festival as a platform for unity and creativity in the whole Baltic,” says Thomas.” That symbolism is still important but these days the festival can be more relaxed about how the message is conveyed – concentrating on the openness of the island's old imperial spa resorts, like Ahlbeck, Bansin and Heringsdorf, and the health benefits of a brisk walk along its 42km of beaches. “The weather can be fantastic in September when we have the festival and the sea is a warm 20º.”

As the sounding Podium of the Baltic Sea, the Usedom Music Festival equally presents the musical life of all countries surrounding the Baltic Sea, providing a special country focus each year of one of the Baltic Sea countries. On the isle of Usedom, the sunniest spot of the Baltic Sea diverse and exciting musical programmes, accompanied by art exhibitions, presentations and readings, allow one to reflect on one’s own culture and sensibilities in the mirror of the others’. Festival music effortlessly overcomes geographic, historical and cultural boundaries and brings people together across countries and generations. World renowned soloists, conductors and ensembles such as Mstislav Rostropovich, Kurt Masur, Kremerata Baltica, Esbjörn Svenson Trio, Kristjan, Paavo and Neeme Järvi or Esa-Pekka Salonen and many more present the music cultures of their countries. The programmes cover a wide range of classical music spiced up with jazz and popular music. The Peenemünde Concerts at a former World War II military testing site, frequently featuring the Baltic Sea Philharmonic and the NDR Symphony Orchestra, are among the highlights of the more than 40 events presented by the Festival each year. They set an example for peace in a region historically divided by war and politics. From 22 September to 14 October 2018, the musical and cultural life of all countries around the Baltic Sea will be this year’s Festival focus. 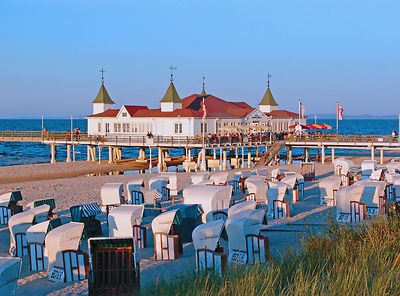