The Berlin Conference 2022 “Co-Creating Europe from the Bottom-Up!” took place on 8 and 9 November 2022 at Allianz Forum next to the Brandenburg Gate in Berlin. The conference included several concentrated debates with cultural practitioners, artists, intellectuals, committed mayors and local civic initiatives as well as citizens and especially the European youth to bring about new narratives and innovative approaches to co-create the Europe of tomorrow.

The discussions at this year’s Berlin Conference centred around the responsibility of Europeans themselves to help shape the future of Europe. To kick off the conference, we will address the role of cities and regions as key bottom-up participants in this endeavour. For it is the lives and achievements of cities and regions as well as their citizens that determine the success or failure of Europe's social as well as economic, cultural and societal reality. The commitment of the cities and regions in their responsibility to contribute to the success of the common European project is therefore the focus of the panel discussions. 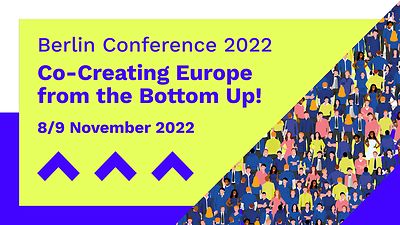 Cities that have had or will have the honour of being European Capital of Culture should – beyond their primary task of organising the year to be as impressive as possible – permanently play a pioneering role as "Cities for Europe". They should combine the privilege of being a European Capital of Culture with a special responsibility for the development of Europe.
In this session, we therefore invite Capitals of Culture and ask them about their stance on the fundamental challenge of being Cities for Europe and how they intend to live up to this. We will discuss the potential of the title, the sustainability of the project and the associated obligation of the cities to contribute to Europe beyond the period of their Capital Year.

We are living in a drastically changing world: a threatening time, a wake-up call for Europe, its citizens, and institutions. The actual situation is demanding for rethinking duties and responsibilities. As this goes for the societies as a whole, it surely is challenging the cultural sector. It becomes even more important than before to foster artistic activities and cultural work across borders as a strong tool against antidemocratic tendencies, against desperation and destruction.

A Soul for Europe calls on artists, cultural and political practitioners as well as intellectuals to reflect on our common responsibility and to take an active role in the creation of a prosperous and human Europe, a citizens’ Europe.

The invited speakers will be asked to share their experiences, proposals and visions, starting with three basic topics: "East/West", "Youth/Citizenship", "Periphery/Cross-Border". The different political, social and cultural developments in eastern and western Europe, the missing interest from the West for the East have become more visible with the war in Ukraine. Was there, or is there really a European identity? What is the view from 'outside' Europe?

Although we see strong initiatives in a young generation as for climate change or other threatening developments, we also realize a growing percentage of young people turning to more conservative issues, or of not caring for social/political developments at all. How can this generation and citizens in general be encouraged to take responsibility to get active for the development of their cities, regions countries, Europe? The war in our neighbourhood has also changed the notion of periphery. Regions as the Baltic States or at the Polish - Czech - German border are now in the centre of European awareness. How can cross-border activities react?

Europe needs and deserves the participation and joint responsibility of Europeans themselves, their cities and regions: Europe Bottom-Up. This effort for the future of Europe must be made visible, cooperation, networks and mutual exchange must be facilitated.

This is the motive for and the goal of the “Europe Bottom-Up” Platform, funded by the Federal Foreign Office and launched by Stiftung Zukunft Berlin. The platform is a digital instrument that brings together different initiatives, project groups, cities and regions that see themselves as actors “from below” for a common Europe. It gives them the opportunity to come together digitally, to present their projects, to learn from each other and to make better use of their potential together. In this way, a digital instrument can also give rise to an analogue community at the foundation of Europe, which not only commits itself to the European project, but also strengthens and develops it with its own diverse activities.

In the session, we will discuss the relevance of Europe BottomUp and the role of the platform as well as its state of development. We also speak about the expectations of initiatives and associations that wish to use this platform for their purposes. What unites the different actors and their activities? How important are such formats for the common European project?