The European House for Culture (EHfC) and deBuren partnered to host the annual event the Brussels Conversations on 14 March 2016 at deBuren in Brussels. This annual event brings together the European House for Culture members and their supporters, a pool of dynamic professionals highly engaged in culture and the concept of Europe as a cultural project, to a meeting focusing on content development.

The event brought together over 20 influential personalities for a roundtable discussion about an ongoing campaign the European House for Culture, as part of the Cultural Coalition for a Citizens’ Europe (CCCE), has been working on called The Decisive Deal: A European Resolution on Culture, For Values, Democracy and Citizenship. The participatory process has gathered citizens’ ideas from across Europe and advanced them during various events and online over the last several years. Developed together with high-level politicians, we are now working with elected leaders of all parties at local, national and European level in order to realize the goals. This event was be a critical moment to discuss making these goals a reality.

The content discussed at the event was provided by a new publication that the European House for Culture, an initiative of the European Festivals Association - EFA, is developing featuring essays from leading lawmakers, mostly Members of the European Parliament, on the future of cultural policy in Europe. The contributions discuss the role that culture play in citizenship across Europe and envision the mutual responsibility that culture and Europe bear towards one another. They represent the individual visions of eight Members of the European Parliament (MEPs), from the Progressive Alliance of Socialists and Democrats, the European United Left/Nordic Green Left, Greens/European Free Alliance, and the Alliance of Liberals and Democrats for Europe. And very important, the vision of the commissioner for culture Mr. Tibor Navracsics himself

One theme that emerged was featuring artists more prominently at the center of all actions. Participants thought that too many of the discussions with leading policy makers are made by managers or networks, and rarely feature artists themselves. This was a part of a growing them, as MEP Martina Michels reminded us in her essay for the publication that “lousy payment is typical” in these sectors, and detects a pattern of self-exploitation. She goes further to suggest that “[T]oo often and too easily therefore cultural producers are made to a role model of a new working class: enterprising, self-organized and satisfied with few social protections.”

Another key topic in the European Resolution on Culture and the essays from lawmakers pertained to public spending on culture. In his essay, MEP Arne Lietz states “that spending on culture should be compulsory and that investing in culture should an EU responsibility, comparable to investment in the overall European project.” The participants discussed the need for direct action towards the EP but also a concerted effort in the local and national contexts to raise awareness to the need for this resolution. One key suggestion was to focus on national governments that already devote key spending percentages to culture and to use them as the good practice examples and allies in the process to inspire action in other Member States where the budgetary allocation to culture is lacking.

Tied to the issue of funding is that of subsidiarity. Culture remains in the exclusive rule of the National States, thus, our goal of a resolution will only be implemented if it is approved in each country. The goal of this dialogue is to establish a European model for a cultural policy that streamlines and acts as a guiding principle across all levels of governance: a model for positive civic values, social justice, solidarity; citizenship through culture, access to culture, cultural participation and artistic creation.

As the EHfC and many other partner organizations have stated before, Europe’s cultural diversity and the power of its cultural activity are invaluable resources and should form the engine that drives the engagement between European citizens and around the project of the European Union. Only by developing a thoughtful framework that effectively acknowledges culture as a provider of strong mechanisms for the development of civic values can we think about the future of the EU outside economic fatalism and outside a narrative of political failure.

The outcomes proposed by our participants at the Brussels Conversations 2016 will serve as the topics for the work we undertake in 2016. We envision that the Resolution and the upcoming publication will inspire action in the European Institutions, in the Member States at large, as well as the local level. We invite you to join us in this collaborative work process. 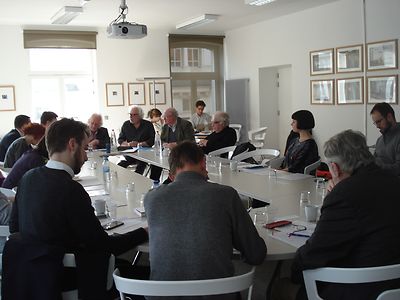