Saodat Ismailova is one of the most internationally visible and accomplished representatives of a new generation of artists from Central Asia who came of age in the post-Soviet era and have established cosmopolitan artistic lives while remaining deeply engaged with their native region as a source of creative inspiration. Her debut feature film 40 Days of Silence, a poignant depiction of four generations of Tajik women living in the complete absence of men, was nominated for best debut film at the 2014 Berlin International Film Festival, and thereafter was screened in more than two dozen prestigious festivals around the world. Her video installation Zukhra was featured in the Central Asian Pavilion at the 2013 Venice Biennale and her documentary film Aral: Fishing in an Invisible Sea won Best Documentary at the 2004 Turin Film Festival. Saodat Ismailova resides in Tashkent and Paris, and is affiliated with Le Fresnoy, France’s National Studio of Contemporary Arts. 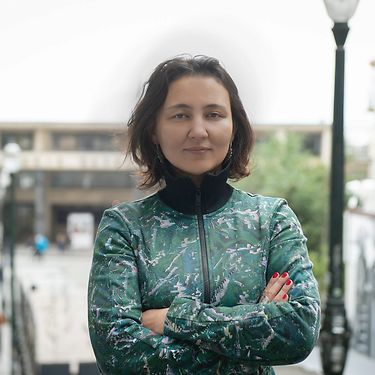