[PRESS RELEASE, Brussels, Belgium, 23 April 2013] The 2013 General Assembly & Conference of the European Festivals Association (EFA) took place from 18-21 April in Granada, Spain, and was hosted by the Festival Internacional de Música y Danza de Granada. It was the opportunity for 145 delegates representing 66 festivals from 35 countries to meet peer colleagues, to exchange on what is at stake in the world of festivals all over Europe and beyond, to identify festivals’ contributions to today’s world, and to have an inspiring time. One of the main outcomes: the Association representing 109 festivals from 44 countries re-elected its current President Darko Brlek.

President Darko Brlek, Artistic and General Director Ljubljana Festival, was re-elected unanimously by the EFA General Assembly for another four years. Brlek is eager to continue the successful work and further the importance of the Association in his third tenure.

“I have seen the Association grow and develop. EFA has become a modern network, implementing numerous artistically, educationally, politically oriented activities. During my next term, we will continue our work in four fields: 1. artistic and cultural exchange and collaboration; 2. training for the next generation of festival leaders; 3. dialogue with policy makers; 4. exchange of know-how on and first-hand insight into festivals; and 5. collaboration with colleagues across the world. This role can be realised thanks to a devoted work plan, a broad, active membership, dedicated Vice Presidents and Board members, a committed Secretariat, and close collaboration with partners from all over the world,” summarised Darko Brlek his ambitions for his next term.

“It is more and more challenging to run a high-quality, active, efficient network of festivals. Not only because of challenging financial times, but also because too often the economic impact of festivals weighs much more than the artistic quality and their sustainable, long-term impact on the well-being of people. EFA’s most important function echoes the most important function of each festival: to serve the artists and artistic creation. EFA aims to ensure that festivals and artists can continue to have an impact on society,” explains EFA Secretary General Kathrin Deventer who presented the General Assembly with the next three-year strategy of EFA under the title “Arts Matter”.

The 3-day programme included many highlights: the launch of The Festival Academy, discussions about issues at heart of the festival business, in particular artistic co-productions and cross-border collaboration; meetings of communications experts and of festivals active in the field of new music (ARS NOVA meeting); and a diverse cultural programme allowing enough networking time.

The programme of the opening ceremony on 18 April included welcome speeches by María José Sánchez (Delegate Regional Government and Vice President Milenio de Granada 2013), Santiago Pérez López (Representative Spanish Government), and José Torres Hurtado (Mayor City of Granada). Furthermore, participants could witness the launch of The Festival Academy, the organisation set up for the implementation of the Atelier for Young Festival Managers, with a keynote speech by Odile Quintin (European Commission External Advisor and former Director General). Last but not least, a new e-publication entitled “Serving Artists Serves the Public” was released in collaboration with the Asia-Europe Foundation (ASEF); it explores the opportunities and challenges of programming arts festivals in Asia and Europe and is a follow-up to the Atelier for Young Festival Managers held in May 2011 in Singapore.

The 2014 EFA General Assembly and Conference will take place in Sarajevo, Bosnia and Herzegovina, at the invitation of the International Festival “Sarajevo Winter”, as 2014 marks 100 years since the outbreak of the First World War. It will be organised in a close partnership with the “Cultural Coalition for a Citizens’ Europe”, the civil society project by A Soul for Europe. 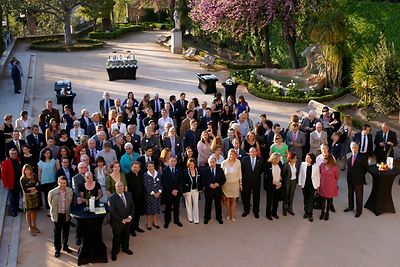