[Press Release Brussels, Belgium, 25 April 2013] On 18 April 2013, the European Festivals Association (EFA) launched The Festival Academy during its 2013 General Assembly in Granada, Spain. “The true role of a festival is to help artists to dare, to engage in new projects” is a statement by Bernard Faivre d’Arcier (former Director Avignon Festival) that serves as the motto of The Festival Academy. It offers various training formats for festival management to young, dynamic and passionate festival makers worldwide. Its mission is to share, exchange and construct know-how on festival management focusing on the essence of festivals – the art and the artist – and touching upon all artistic disciplines. The Festival Academy is ambitious to develop and sustain a network of festival leaders of the future.

“EFA set up The Festival Academy based on the success of the Atelier for Young Festival Managers, the 7-day training programme and its six editions between 2006 and 2013 in different parts of Europe and beyond, and its predecessor “Eurofest Training Programme” held in Geneva and Estoril 1999/2000. The Festival Academy incorporates extended partnerships with networks, cultural institutes, embassies and festivals, higher geographical outreach and new training formats in festival management addressed at more diverse target groups,” explains EFA President Darko Brlek the motivation of setting up the new initiative.

The Festival Academy is ambitious to extend its offer to new cities, participants and topics, and to develop into a sustainable training platform for people working in different fields of festival management. It empowers a new generation of emerging leaders (artistic and production) as capacity building and internationalisation are at the Academy’s core. It generates new professional opportunities for festival makers.

Board member of The Festival Academy, Odile Quintin (European Commission External Advisor, former Director General) underlined during the launch event: “The engagement of the European Festivals Association in allowing life-long learning experiences in the cultural sector is exemplary. These kinds of initiatives are crucial for the further development of a cultural Europe. Nobody will be successful by doing business as usual. We need young creative minds for regenerating and rethinking the future.”

In 2013, The Festival Academy includes three training formats: the Atelier for Young Festival Managers: the 7-day training programme addressed at 45 young artistic festival managers who are guided by 10 renowned festival directors from all over the world; the Festival Readings: a 3-day encounter taking place during a festival, with readings by high-level lecturers from the festival sector, addressed at festival representatives working in a broad range of festival departments, and open to the general public; and the Training for Production Managers: an exchange on festival production addressed at young production managers.

The Festival Academy is travelling across Europe and the world and is always strongly connected to the local context in which it takes place. The upcoming activities include: Ateliers for Young Festival Managers in Beirut, Lebanon (5-12 October 2013, application deadline: 1 May 2013), in Edinburgh, UK (3-10 April 2014; application deadline: 30 June 2013), and Kampala, Uganda (21-28 September 2014; Call for Application to be launched second half of 2013); and the first Festival Readings in Sibiu, Romania during the Sibiu Performing Arts Open Market (11-13 June).

In addition to these activities, The Festival Academy aims to sustain and further develop the Academy Alumni Network which has emerged from the previous Ateliers for Young Festival Managers. Today, it counts 172 young festival leaders and 28 renowned festival directors from 52 countries and regions worldwide. This network ensures sustainability beyond the training formats: it allows for the development of new cooperation projects and broader networks.

For more information and updates please consult www.TheFestivalAcademy.eu and www.AtelierForYoungFestivalManagers.eu.

The European Festivals Association (EFA) is the umbrella organisation for festivals across Europe and beyond representing 109 festivals, national festival associations and cultural networks from 44 countries. For more information consult www.efa-aef.eu or contact info@efa-aef.eu. EFA thanks its structural partners for their support: the European Commission, the National Lottery Belgium, the Flemish Authorities and the City of Ghent. 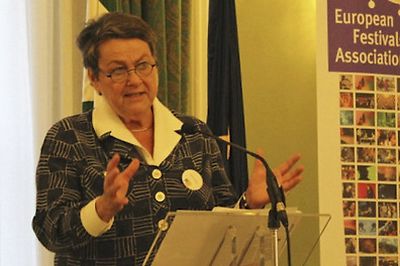