New on Festival Bytes: Through the Gate of Pomegranates

(By Jelle Dierickx) A freshly mowed lawn. That’s what Granada smells like once the door of the airplane is opened. The two-day experience of the senses can begin. Before having a short night rest I meet Eva, Kathrin, Nathalie and Jacqueline at the entrance of the hotel. The team is well prepared for the storm tomorrow, and Eva immediately asks some deep questions about a possible future for Europe. Yes, this is clearly an EFA meeting. Not one second is wasted.

Early morning brings many seconds but for me it shouts only one word: Alhambra! I put on my tourist mask and face the hordes, hordes and more hordes with cameras, notebooks and backpacks. They transform the architectural and botanical wonder into a kind of anthill. Being alone and being very early I nevertheless can catch a bit of the main attraction of Granada in its radiant state.

O, the beauty. O, the motives. O, the extraordinary achievement of men. And yet one also hears the whispering at the fountains, the conspiracies, the overheated blood that runs through the ages. Before these thoughts can get the upper hand, I find Anna meditating in the court of the Myrtles. The focus is back on the sunflooded architecture at hand, the amazement. The Palace of Charles V, the Nasrid Palaces, the Mosque baths and the waterplays at the Generalife cannot but leave a strong impression. One needs to close the eyes a while to recover. But that doesn’t really help. Than you focus on the smell of the flowers, of the blue rain and other plants. And you hear the birds, the singing of the water that seems to be everywhere and of course the babbling of the hundreds of visitors (Japanese, French, German, Dutch, American…). The Alhambra Hub!

Today, the 18th of April, apparently is Monument Day in Spain. At the Gate of Pomegranates students of art history, dressed in blue shirts, are collecting signatures. To my surprise they are not recognised as specialists on the job market. Their slogan: “La historia del arte no está solo en los libros… está en la calle!” The history of arts is not only to be found in books… it is out in the streets. With love and in fluent French and English the students show their love for Granada as cultural capital. I hope their plea is heard.

Back in the centre of the city I cannot help but enter the Real Capilla de Granada with the Cripta de los Reyes Católicos. The Royal Chapel with the tomb of Ferdinand of Aragon and Isabella of Castille. Even after the extraordinary beauty of the Alhambra this space is powerful enough to reach my already saturated senses. Especially the Crucification and Nativity by Rogier Van der Weyden strike me as paintings from sublime expression. It is already clear: this city has a lot of treasures.

The sun starts to blaze in Granada and I’m enjoying the moment of writing these words before having lunch with Anna. Enjoying a paella we talk about The Festival Academy that will be launched today. We’re both alumni of Ateliers for Young Festival Managers and are convinced about the importance of these gatherings. The discussion continues in the afternoon during the General Assembly of The Festival Academy with next to Anna, Odile, Darko, Michael, Hugo, Kathrin and Inge.

A few hours later the big festival family (more than 140 people from about 40 countries) gather for the official opening of the conference. What follows can only be described as “speeches with peacock”. The animal outside that joined the speakers could be seen as a symbol for the festival makers that were present: proud, beautiful and giving a clear signal. Festivals matter. 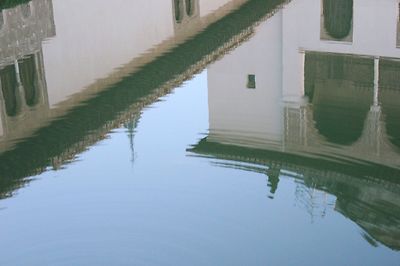