EFA Secretary General Kathrin Deventer, who is a representative of the Cultural Coalition for a Citizens’ Europe, explained: “The New Narrative for Europe project is a great opportunity for all of us involved to bring together the citizens we represent through our networks, including numerous visionary artists and intellectuals, to allow them to have their visions of the future of Europe heard. The crucial aspect is that the vision is fashioned by the citizens of Europe but strongly supported by their political leaders who can take the responsibility to provide a strong framework for their realisation.”

The New Narratives for Europe project was launched at the Center for Fine Arts (BOZAR) in Brussels on 23 April 2013. José Manuel Barroso, President of the European Commission was joined by Commissioners Viviane Reding and Androulla Vassiliou and 100 civil society leaders to initiate this project. Over the course of the next year a new vision and identity for the European project will be proposed, reflecting on its cultural values in the process of unification. The participants represented a cross-section of civil society and the cultural sector in Europe and will serve to give input to and multiply the effects of the project.

President Barroso made a call to action that verifies the mission of the Cultural Coalition for a Citizens’ Europe: “Europe calls on you because we cannot let people think that Europe is technocratic or bureaucratic. Europe has a soul, and that soul is its civilisation in all its rich creativity, its unity in diversity and, even, its contradictions. In a word, Europe needs you and your ideas, your creativity to realise its full potential as a project in which every citizen is an actor.”

The Cultural Coalition for a Citizens’ Europe will contribute to the narrative throughout the year by participating in the General Assemblies and taking up the issues at stake as conversation fodder throughout its own events, debates, and publications, culminating in the Berlin Conference 2014: A Decisive Deal.

The aim of “A Soul for Europe” is to implement concrete steps and conduct projects to ensure that Europe makes greater and better use of its cultural assets. In the process, culture should be utilized more than in the past as a strategic factor for development – at the local, regional, national and European level. All fields of policy beyond the cultural sector, from social to foreign affairs, should include a cultural component. 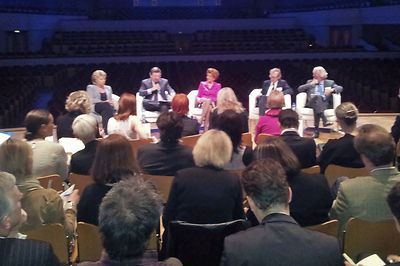