New on Festival Bytes: Visiting Ankara – the capital of Turkey

I have never been to Ankara – the capital of Turkey. This is probably true for many who travelled to Turkey several times to spend some holiday at the Aegais or the Riveira, or to dive into the rich cultural life of Istanbul. Ankara does not figure as the first destination. Ankara is the capital, and I imagined something like Canberra in Australia: a city which has been designated capital because of certain reasons; but not because it represents the social, economic, cultural centre of the country. But I was wrong.

Ankara is a city of five million inhabitants, bigger than many capital cities across Europe! Innumerous little hills with little, old, red-roofed houses, or modern skyscrapers, taking over the landscape slowly. It is is not as “sensed” as Istanbul, I feel, but when you are awake at 4.45 in the morning and you hear the imam calling for the morning prayer (it feels as if the whole city is singing, vibrating…), it’s clear: I am in Turkey – and Ankara, with a population of 99% Muslims.

I am traveling to Ankara because of its festival: the Ankara International Music Festival has been the second Turkish member of the European Festivals Association. It became a member in 1993, after the Istanbul Music Festival which already joined the Association in 1977. It is celebrating its 30th anniversary this year, as well as the 40th anniversary of the Sevda-Cenapand Musik Vakfi – SCA Music Foundation, the organising body, both under the imagination and guidance of its President Mr Mehmet Basman.

As an active member of EFA, partner in the project MusMA – Music Masters on Air and supporter of Turkish composers (I received the 40th anniversary compilation of the SCA which includes Ilhan Usmanbas, Ulvi Cemal Erkin, Ahmet Adnan Saygun), the Festival is an important international platform for artists to present their work to the Ankara audience. For three weeks every April, the Festival invites artists and audiences alike.

This year, the Festival hosted artists, choirs and orchestras from countries such as Mongolia, Italy, Norway, Croatia, Austria, Belgium, Costa Rica, Japan, South Korea, Germany, Argentina, Russia, Spain, Ireland, Poland and Portugal. The closing of the Festival was an impressive event with the Wroclaw Philharmonic Orchestra and the Lisbon Choir together with the Ankara Children’s choir and the Bilkent University Orchestra under chief conductor Işın Metin. It was impressive to see 400 artists on stage performing Mahler’s 8th symphony in a hall that captures 3000 seats – all sold out!

I travel with Turkish Airlines. Turkish Airlines is the best; not only the jingle that keeps on being stuck in my mind, but also the service, the seats, and above all, the food: chicken, koefta, rice, aubergines! even the orange juice is freshly pressed. Although I did not opt for a raki or a good red Kavaklidere wine (I spared that for my time in Ankara), I already felt like being in Turkey on the flight. The strategy works!

The flight takes me all across Europe: from Brussels in the North-West to Istanbul in the South-East takes three hours crossing Belgium, Germany, Czech Republic, Slovakia, Hungary, Romania and Bulgaria! Impressive, this Europe! And worth dreaming about: that all these countries are united in the belief of freedom, peace, and democracy. The question whether Turkey will join the EU or not is not of predominant concern for me: important is its commitment towards values of humanity and democracy, be it under the umbrella of the EU or another kind of association.

I have to thank the Ankara International Music Festival and in particular Ömer Bozkurt for inviting me (and for taking me to marvelous places in the city (the Ataturk mausoleum, the castle of Ankara, the Archeological museum, the first and second parliament buildings of the city: all worth a visit of the capital of Turkey), and Ibrahim Barisik for introducing me to marvelous persons in the city. 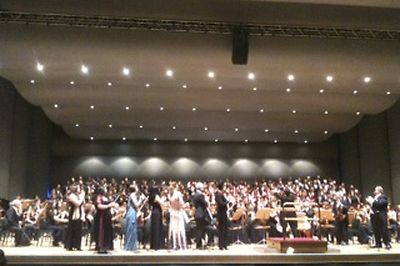