On 30 April 2013, the 30th Ankara International Music Festival, organised at Turkey’s capital, concluded with a spectacular finale with an international mix of musicians and vocalists performing Gustav Mahler’s Symphony No. 8 in E-flat major, which is often called the “Symphony of a Thousand” because of the large instrumental and vocal forces required. The Ankara premiere has been the second performance of the piece in Turkey.

The 10-day collective rehearsals that preceded the concert were done at the 800-seat concert hall of the Faculty of Music and Performing Arts of the Bilkent University, with seats for the audience dismantled to make room for the throngs of musicians and vocalists. A total of 360 musicians performed at the concert, backed by a large support group.

The 95-minute performance ended to a drawn-out standing ovation and Conductor Işın Metin holding up the score to the applause of the audience. As the Ankara International Music Festival marked its 30th anniversary, and organiser, SEVDA-CENAP AND MUSIC FOUNDATION, its 40th, the audience made clear its appreciation for international participation at this memorable concert which fully deserves the distinction of being the “musical event of the year 2013.” The concert also brought conductor Işın Metin the honour of being the first Turkish conductor directing Mahler’s Symphony of a Thousand. 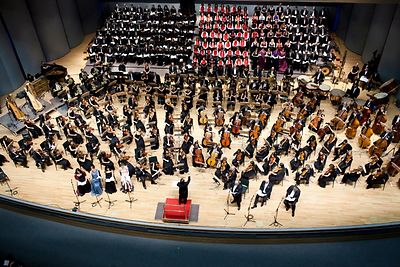