There’s the passion of flamenco, a cutting edge visual arts exhibition, Shakespeare’s Globe, harrowingly intimate dance-theatre, bracing brassy music and orchestral concerts and even a performer-based circus show… The 15-day-long Malta Arts Festival (30 June-14 July) is approaching – and this year promises to be more intriguing than ever.

With a varied programme of theatre, music, dance and visual arts, the Festival offers a broad range of genres and artistic forms. Held mainly in open-air venues in Malta’s warm summer nights, the event has also over the years opened up little-used and special venues, including the Old Opera House ruins, Argotti Gardens and Ospizio in Floriana, and been an impetus for the islands to set about providing a greater diversity of art and performance spaces.

Returning this year are some well-loved and familiar acts: Shakespeare’s Globe is back with The Taming of the Shrew which will be staged on the 3 and 4 July; so, too, is Puerto Flamenco – whose passionate rhythms will open the Festival on 30 June and 1 July. And so are those demi-gods of string quartets – the Kronos Quartet – who, this year are celebrating their 40th anniversary – and who will perform on 2 July.

Such long-standing relationships make for some interesting collaborations between foreign and local performers. This year, in fact, the Festival will host a number of workshops and residencies – one, by Kronos Quartet, which is open to string quartets, will be held between 30 June and 2 July. Another, with members of Wayne McGregor | Random Dance – a workshop for dancers – will be held on 10 and 11 July. Applications for both of these are currently open. A third workshop – with members from Shakespeare’s Globe – will be held on 2 and 4 July and is expected to attract directors and actors.

Balancing quality popular acts with lesser-known intriguing work which nevertheless pushes boundaries is one of the things which the Malta Arts Festival does best. So one of this year’s two festival commissions will feature the return of the Big Band Brothers in Ftakar 3, based on the lyrics of poet Joe Friggieri. The performance is expected to draw crowds on 7 July. The other festival commission, Darirari, a show featuring professional international circus performers, local artists and craftsmen, produced by Malta-based Cirku Malta, aims to create a nouveau cirque with a Mediterranean timbre. Bringing together circus, theatre, fireworks, water, carnival, digital arts, magic and music, the event – to be held on 9, 11 and 12 July – is likely to be one of the most eagerly-awaited at this year’s festival.

In stark contrast to these events’ festive and popular atmosphere, Gwerra, Familti… u Ommi, a monologue written and performed by Pino Scicluna – to be held on 6, 7 and 8 July – is an intimate recounting of the war based on stories of people who, between 1940 and 1945, had to face difficult choices. And Two Room Apartment, a duet performance by Israeli dancers Niv Sheinfeld and Oren Laor – reflects on the relationship of the two dancers as partners in life and creators. The performance – to be held on 10 and 11 July – comes with an 18+ classification.

The sea, islands, boundaries, Malta and the Maltese are a recurring theme in this year’s festival… they surface in Puerto Flamenco’s Isla, Cirku Malta’s Darirari… and Swim: fragile interventions, a visual arts exhibition curated by Austin Camilleri, which will explore the sea both as a vastness beyond reach and a fierce border. Boundaries, it seems, are there to be crossed. FAR, a dance work by Wayne McGregor for his company Random Dance, explores the relationship between mind and body, showing how the creativity of the mind informs that of the body. To be held on 13 July, the show showcases the qualities of the multi award-winning British choreographer who is renowned for his physically testing choreography and ground-breaking collaborations across dance, film, music, visual art, technology and science.

The festival also prides itself on supporting emerging artists. This year, this series will feature the Camilleri-Lucini Duo in a flute and guitar recital on 6 July and a piano recital by Christine Zerafa a week later. Alongside them are concerts by The New Choral Singers who will perform Viva Verdi! on 6 July, a concert by oud player and singer Dhafer Youssef on 10 July and such firm favourites as performances by the Malta Philharmonic Orchestra, directed by Michael Laus with soloists Marcelline Agius and Nadia Debono, in a concert themed around the 20th-Century Harpsichord which will be held on 5 July. The Malta Philharmonic Orchestra will also close the festival in grand style on 14 July in a concert featuring the popular all-time favourite Rhapsody in Blue, conducted and performed by Wayne Marshall.

Some of these performances will delight, others might disturb. All, however, aim to raise standards in their different ways. For eight years the Malta Arts Festival has brought together a showcase of top quality events held annually in Malta’s capital Valletta in summer. Listed by the UK Sunday Times Travel section on its “Top 10 opera, dance and arts festivals” taking place across Europe in 2011, the Malta Arts Festival has achieved international recognition. The Festival is a member of the European Festivals Association.

The Malta Arts Festival is supported by the Malta Council for Culture and the Arts. Mario Frendo is the artistic director. It is sponsored by MSV Life, Switch Design Brand Strategy, Infusion Web + It Solutions, Phoenicia Hotel, Marsovin and the Parliamentary Secretariat for Culture and Local Government. 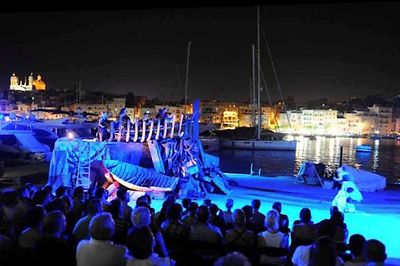