The first edition of the European Festivals Association’s Festival Readings took place from 11 to 13 June 2013 in Sibiu, Romania during the Sibiu Performing Arts Open Market and as part of the Sibiu International Theatre Festival. The unique 3-day programme consisted of public lectures and debates, and introduced participants to artistic festival management.

The Festival Readings are a space for discussion embedded into the dynamics of the festival. Participants and distinguished presenters are invited to reflect on festivals’ role in society. The Festival Readings explore how a festival, taking place in a particular context, can be a special and innovative experience and a platform for the art, artists and audiences alike.

The 2013 Sibiu Festival Readings were co-organised by the European Festivals Association and the Sibiu International Theatre Festival (7 to 16 June 2013), the most significant annual performing arts event in Romania. For the first edition of the Festival Readings, EFA selected renowned festival leaders who have been collaborating with the Association for many years, for example as presenters at the Atelier for Young Festival Managers.

The programme included cultural performances and meetings with artists and other guests.

Sibiu is a vibrant city that carried the title European Capital of Culture in 2007. The festival is an outstanding opportunity for its expected 60,000 spectators to enjoy more than 350 events with artists from more than 70 countries taking place in 60 venues. 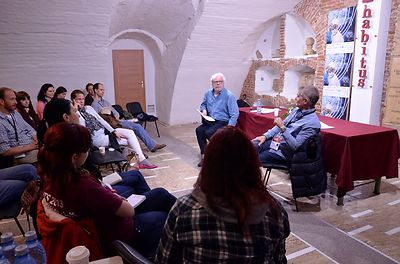