Vilnius Festival 2013: Seven plus one for the 17th year

It is the17th year of the Vilnius Festival – one of the country’s most respectable music events - and this time it is dedicated to Lithuania’s Presidency of the European Council. The Festival will take place from 3 to 20 June. The programme of this musical forum organised by the National Philharmonic and the public institution Vilniaus Festivaliai features 8 concerts, or, more specifically – seven plus one, as the concert of Bobby McFerrin and Group individually organised by the Vilniaus Festivaliai to celebrate the 10th anniversary of this public institution has also been included into the Festival programme.

The opening concert of the Festival will take place on 3 June, presenting the internationally acclaimed singer Violeta Urmana and the Lithuanian National Symphony Orchestra under Modestas Pitrėnas at the Lithuanian National Opera and Ballet Theatre. The programme of the concert features symphonic poem In the Forest by Mikalojus Konstantinas Čiurlionis and works by Richard Wagner and Richard Strauss. This programme is going to be performed at numerous celebratory concerts dedicated to Lithuania’s presidency of the EU Council and the audiences in Vilnius will be the first to hear it.

On 5 June we shall hear the charismatic guests whose singing entrances everyone from kings to bikers. The pride of Great Britain, male vocal sextet The King’s Singers will appear at the Philharmonic Hall. The programme titled “An Evening with The King’s Singers” features works by Adrian Willaert, Orlando di Lasso, Claude Debussy, Cyrillus Kreek and Paul Patterson, as well as diverse compositions from the classical collection of the sextet’s repertoire.

The visitors of this year’s Festival will also have a chance to hear the pianist Andrius Žlabys. An improviser and composer, this musician is a rare guest in Lithuania and this time he returns as a contemplative interpreter of Bach’s music. The concert to be held on 7 June at the Philharmonic Hall presents Andrius Žlabys and the Lithuanian Chamber Orchestra led by the violinist Sergei Krylov, a musician invoking the very soul of a violin. The programme “Beauty and Depth of Music by Johann Sebastian Bach” includes the composer’s keyboard and violin concertos, plunging the listeners into the world of his music.

Traditionally, the Festival’s programme also features a recital. This year, such extraordinary position of the programme was entrusted to violinist Dalia Kuznecovaitė – the winner of international competitions building a successful international career. She will appear together with pianist Petras Geniušas and it is quite possible that their concert on 10 June at the Philharmonic will mark the beginning of a new creative path for this newly formed duo.

On 13 June the Festival presents a concert of singer Bobby McFerrin and instrumental group at the Siemens Arena, organised by the public institution Vilniaus Festivaliai. Over the recent years, this public institution has been hosting extraordinary concerts of internationally known performers under the “Concerts of the Year” title. This year the company celebrates its 10th anniversary, thus the present concert might serve as an intro into the future programme that could be called “Concerts of the Decade”.

From the beginning, the Festival held on to the tradition of honouring 14 June – the Day of Mourning and Hope, which is of special significance to Lithuanian people. This year the date will be commemorated at the Lithuanian National Opera and Ballet Theatre with a performance of the Polish Requiem by the Polish composer Krzysztof Penderecki. The piece will be performed by an international team of soloists and collectives: soprano Nomeda Kazlaus, mezzo-soprano Agnieszka Rehlis, tenor Ed Lyon, bass Liudas Mikalauskas, Kaunas State Choir and Wroclaw Philharmonic Symphony Orchestra under conductor Jacek Kaspszyk.

Another guest of the festival is the viola virtuoso Yuri Bashmet, who has appeared at the past concerts of the Festival. On 16 June, the world’s most famous viola player will celebrate his 60th anniversary at the Philharmonic Hall, joined by the chamber ensemble Moscow Soloists (founded by Bashmet himself) and the president of Ljubljana Festival, famous Slovenian clarinettist Darko Brlek. The programme features works by Wolfgang Amadeus Mozart, Carl Maria von Weber, Niccolò Paganini and Pyotr Tchaikovsky.

The closing concert of the Festival will bring the mood of summer jazz. Michel Camilo, one of the best jazz pianists of today will visit Lithuania for the first time. Born in Santo Domingo, Dominican Republic, this musician joins classical, jazz and Latin American styles in his music. He has performed with such jazz legends as Wynton Marsalis, Herbie Hancock, Arturo Sandoval, Béla Fleck and many others. On 20 June the listeners at the Philharmonic hall will hear his ensemble Michel Camilo Trio from the USA.

The concerts at the Philharmonic Hall and the Opera and Ballet Theatre start at 7pm; the concert at the Siemens Arena is planned to begin at 8pm. Tickets are available at the box office of the Lithuanian National Philharmonic Society (except for the concert of 13 June), the box office of Lithuanian National Opera and Ballet Theatre (tickets to events of 3 June and 14 June only), the BILIETAI.LT ticket distribution system (except for the concerts of 3, 13 and 14 June) and ticket distribution system TIKETA (tickets to the event of 13 June only).

For more information about the Festival, please visit www.vilniusfestival.lt. 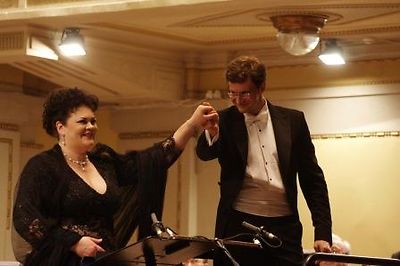