New on Festival Bytes: Places are sensed, senses are placed

(By Kathrin Devente) Next to me on the bus from Vienna to Brno an older man from Brno, who has been working and living in Vienna for more than 25 years together with his family, told me that it is always a strong moment of emotion to come back to Brno, to his home town. He says he feels very much connected, he feels at home. It reminded me of the quote Jonathan Mills (Director of the Edinburgh International Festival) always refers to by French philosopher Maurice Merleau-Ponty: “Just as places are sensed, senses are placed.” Yes! Brno is his hometown; his story, his history, his feelings, are connected to this place.

There is no better quote to describe the Concentus Moraviae Festival and its unique format: its full name is Concentus Moraviae International Music Festival of 13 Towns. For 18 years the festival has offered the finest music in 13 towns around Brno – in fact more and more cities and villages are involved each year, but 13 towns form the core.

The festival gives sense to the places, unique venues including castles and churches with their history and their story: a true discovery of the landscape and the beautiful cultural heritage in South Moravia. The festival is truly embracing its region, and the region embraces the festival: mayors and cultural representatives of the respective cities come together regularly to discuss the way of collaboration and ideas for the programme. And citizens follow: not only the people from the villages, but also from neighbouring towns and cities, from Brno, Prague and more. Also more and more international audience members feel invited to discover the region and its artistic and cultural treasures.

This year, the festival chose the theme: Italian Sun. The opening concert ‘davvero’ brought the Italian sun to Moravia: the Accordone Ensemble and the extraordinary singer Marco Beasley introduced musical Naples, the city between the calm sea and fierce Vesuvius, in a fresco of Neapolitan music dating from 16th century to the present days, at the chateau in Moravský Krumlov.

“Europe has looked to Italy with admiration across the bulwark of the Alps ever since the Middle Ages and during the baroque period Italy’s influence on European music reached its peak. Following the Italian traces which left a deep imprint on the territories of Bohemia and Moravia, as well as the traces of our composers who were active in Italy is an important part of the dramaturgy for the festival’s concerts. South Moravia has the character of a landscape, a cultural heritage and a lifestyle in the Italian spirit. I therefore believe that the Italian sun will at least feel a little at home on a visit to Moravia,” explains Václav Luks, the festival’s dramaturge, this year’s theme.

This festival makes sense; and it gives sense to the places. I can only recommend it! Thank you David Dittrich, Jitka Mikova and Zdenka Kachlova, for such revealing days! 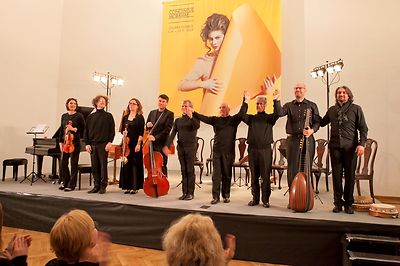