EFA newsletter FestFlash 1/2013: “Festival Bytes: A Journey through the World of Festivals”

The newsletter FestFlash of the European Festivals Association (EFA) invites you on a journey through the world of festivals! Inspired by EFA’s latest publication “Inside/Insight Festivals. 9 Festival Directors – 9 Stories” and with contributions from EFA’s blog Festival Bytes, the FestFlash provides you with insights into festivals, festival making and artistic endeavours; it features a variety of sources and shares the ideas of personalities from the festival and cultural sectors on the role of arts and culture in general and of festivals in particular.

Behind the applause and footlights, festivals are complex creatures that require careful tending and nurturing. Each festival director brings their own vision, experience, intuition, ambition and inspiration to the process of shaping it – each negotiating in his or her manner the politics, economics, and social realities of the city where it takes place.

Our stops in this FestFlash include, amongst others: Ankara, Belgrade, Beirut, Brno, Derry-Londonderry, Granada, Hay-on-Wye, Sochi, Zurich, and all the way to Australia and Singapore.

By Ching-Lee Goh, Director CultureLink Singapore, former Director Singapore Arts Festival: “I did become a diplomat, albeit a ‘cultural diplomat’, with the added bonus of engaging with artists and the arts. I was to find myself combining art and diplomacy to win friends and goodwill for Singapore’s arts both at home and abroad. Those same interests in history and current affairs were to provide helpful contextual resources for my future role as a festival director.” In EFA BOOKS 5 “Inside/Insight Festivals”, Ching-Lee shares her vision of the festival and cultural sector in Singapore. Continue reading!

By Robyn Archer, Creative Director The Centenary of Canberra (2013): “I have come to most things by accident. It never occurred to me that I could ever be a festival director and there were no recognisable models to follow,” Robyn Archer states in her essay for EFA BOOKS 5 “Inside/Insight Festivals”. Festival making is the “art of juxtaposition,” says Robyn. “The director must have the skill to combine old with new, international with local, familiar with unfamiliar, so that a seamless beast emerges, much much greater than the simple sum of its parts.” Continue reading!

Through the Gate of Pomegranates in Granada

By Jelle Dierickx, Artistic Coordinator Musikfestspiele Potsdam Sanssouci: A freshly mowed lawn. That’s what Granada smells like once the door of the airplane is opened. The two-day experience of the senses can begin. Before having a short night rest I meet Eva, Kathrin, Nathalie and Jacqueline at the entrance of the hotel. The team is well prepared for the storm tomorrow, and Eva immediately asks some deep questions about a possible future for Europe. Yes, this is clearly an EFA meeting. Not one second is wasted. Continue reading part 1 and part 2 of Jelle’s blog on EFA’s 2013 General Assembly and Conference in Granada!

It is all about listening

By Yuriy Vulkovsky, Executive Director Bulgarian Festivals Association: It is all about listening. As a newcomer at the General Assembly of the European Festivals Association (EFA) in Granada my main task was to listen carefully. And I heard a lot of interesting stories and facts. It was inspiring. But it is not only about me – during the conference it became clear that it is time for all of us to listen more carefully and more profoundly. So, I was listening, and I was thinking. About EFA, about the conference and also about the Bulgarian context I am coming from. Continue reading!

Places are sensed, senses are placed

By Kathrin Deventer, EFA Secretary General: Next to me on the bus from Vienna to Brno an older man from Brno, who has been working and living in Vienna for more than 25 years together with his family, told me that it is always a strong moment of emotion to come back to Brno, to his home town. He says he feels very much connected, he feels at home. It reminded me of the quote Jonathan Mills (Director of the Edinburgh International Festival) always refers to by French philosopher Maurice Merleau-Ponty: “Just as places are sensed, senses are placed.” Yes! Brno is his hometown; his story, his history, his feelings, are connected to this place. There is no better quote to describe the Concentus Moraviae Festival and its unique format. Continue reading!

Stacks from Hay: A Festival Diary

By Simon Mundy, poet, novelist, festival director, broadcaster, cultural policy adviser: I’m at the 10 day long Hay Festival, in a field just outside the Welsh border town of Hay-on-Wye. For the last forty years the town has been famous for its second-hand bookshops. For the last 26 years, it has been home to a books festival, started by Norman and Rhoda Florence and now run by their son, Peter, that has steadily grown into a festival franchise that spans the world and brings thousands of people in to hear nearly 450 events in the last week of May. Continue reading!

“The mobilisation of citizens in many cities all over Turkey shows a great need for debate on the concept and the implementation of democracy, pluralism and citizenship in the country. EFA hopes that the result will be positive and supports its members in their actions. This is just one instance of a global trend that shows us new tools and concepts are needed to bring contemporary democratic values to life,” says EFA President Darko Brlek. Yesim Gürer Oymak, Director Istanbul Music Festival, and Filiz Eczacıbaşı Sarper, Executive Board President International Izmir Festival, thank all festivals colleagues, managers, artists, orchestras and ensembles from around the world, who sent encouraging messages in support. Continue reading!

“Symphony of a Thousand” in Ankara

By Kathrin Deventer, EFA Secretary General: I have never been to Ankara – the capital of Turkey. This is probably true for many who travelled to Turkey several times to spend some holiday at the Aegais or the Riveira, or to dive into the rich cultural life of Istanbul. Ankara does not figure as the first destination. Ankara is the capital, and I imagined something like Canberra in Australia: a city which has been designated capital because of certain reasons; but not because it represents the social, economic, cultural centre of the country. But I was wrong. Continue reading!

By Jurriaan Cooiman, Director CULTURESCAPES, President swissfestivals: The law of the street is without mercy – cars, cars and more cars everywhere from Hamra to downtown. It is like a trip between two cities in Switzerland. When a car was driving into our direction in a one-way-street (we were driving in the “right” direction) the taxi driver said: “You see, we are a free country!” Continue reading!

By Jonathan May, Digital Producer London International Festival of Theatre (LIFT): 30 years ago the parade ground at Ebrington in Derry-Londonderry echoed to the sound of soldiers marching on what was one of the most modern military forts in Europe. In this City of Culture year for Derry the former barracks are once again full to capacity – but this time with locals and visitors eager to participate in a parade ground which has been transformed into the city’s newest public entertainment space. Excited by the prospect of creating new stories with local artists, dancers and musicians in Derry-Londonderry, LIFT jumped at the chance to take part in the exciting year-long programme of cultural activity as part of the City of Culture 2013, many events of which will be held at Ebrington. Continue reading!

By Inge Ceustermans, EFA’s Project Manager Atelier for Young Festival Managers: “What would you do if I told you that you have zero Euro for your festival?” asked Katarina Zivanovic, City of Belgrade Secretary for Culture, addressing an international audience at the opening of the European Festivals Association’s (EFA) meeting of its 2013 Collective and Affiliate Members at the City Hall in Belgrade. Welcome to Belgrade…! This statement was actually made a few months earlier during a meeting the Secretary for Culture held with all festival directors of Belgrade on the cultural budget; Ms. Zivanovic not only said this as a provocation! Authorities see this as a tool for innovation and are actually implementing it. Until today, Belgrade’s festivals don’t know precisely what their budget will be for this year. Continue reading!

By Kathrin Deventer, EFA Secretary General: From 15-24 February 2013, the Winter International Arts Festival Sochi opened its door for the sixth time. It is organised by the leading concert management company “Russian Concert Agency”. Yuri Bashmet, Sochi 2014 Ambassador and the Festival’s Artistic Director, brought the Festival to an outstanding artistic level in 2013. Sochi is not only the location of the Winter International Arts Festival, but also the place where the XXII Olympic and Paralympics Winter Games will happen in 2014 – a very special year as the festival is contributing to the Cultural Olympiad. Continue reading!

Festival Bytes from around the world

The Blog Festival Bytes of the European Festivals Association (EFA) is a space for story-telling about festivals. It shares the ideas of personalities from the festival and cultural sectors on the role of arts and culture in general and of festivals in particular. The bloggers make us think; they take us behind the scenes of their activities; they share their insights and expertise, exchange their ideas and visions, explore trends and best practices. They inspire us and invite to share our own (digital) stories. EFA is always looking for (guest) bloggers. Get in touch if you have a festival story to tell!

Journey through the world of festivals 2012

60 Diamonds of the EFA Jubilee: The European Festivals Association celebrated its Diamond Jubilee in 2012. Throughout the year, and under the motto “60 Years On: Festivals and the World”, festivals joined the celebration. All activities could be followed via the Jubilee website, facebook, twitter, YouTube and the blog Festival Bytes. At the end of the year, EFA assembled the 60 most crucial moments of the year! 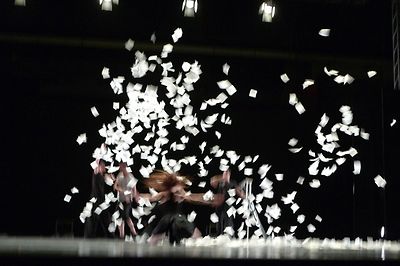