This summer, the Beiteddine Art Festival celebrates its 28th edition under the label of Creativity, Diversity and Excellence. From 21 June to 10 August, the 2013 season presents an impressive choice of performances: from a musical journey following the steps of Marco Polo linking East and West, to a Chinese Acrobatic Circus by their National Acrobatic Troupe, from Flamenco with the great dancer Maria Pages, to ancient Arabic music of the 14th century, from Edith Piaf’s legendary repertoire to jazz and blues with Dee Dee Bridgewater and Ramsey Lewis…

The Festival promises a rich programme bringing once more traditional and avant-garde performances to the magical courtyards of the Beiteddine Palace. Since its foundation in 1985, the Festival has developed into an international event; today it is one of the most attended festivals in the region, drawing tens of thousands of spectators every summer into the palace’s beautiful courtyards.

“On certain summer nights, when the arcades are lit and the courtyards are filled with music, you can actually feel it… You can feel the Palace coming alive. It has found a friend in the Festival and a life of its own,” says President Nora Joumblatt.

The Beiteddine Art Festival has created a space for encounters for all those who believe that culture and art have a fundamental role to play in the development of society.

In line with this belief, the Festival joins forces with the European Festivals Association and organises the first Atelier for Young Festival Managers in the Arab world: it will take place from 5 to 12 October 2013 in Beirut and will allow 45 participants and some ten renowned festival leaders, to discuss different aspects of artistic festival management.

“Beirut, a city at the crossroads between East and West, was reborn seven times from its ashes. This resilient capital is an Arab metropolis but nonetheless a contemporary European city. The Beiteddine Art Festival is at the heart of this interchange: It was born at times of war, and has grown against all odds into a spectacular cultural hub for the region. It offers a vibrant and unique platform for multicultural exchange and debate,” stresses Nora Joumblatt. 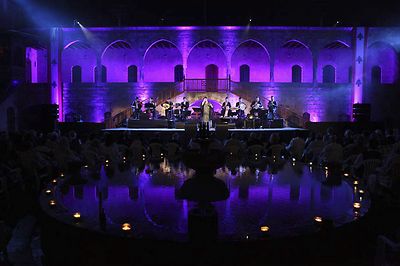