20th anniversary of the Usedom Music Festival: Focus on Estonia

The 20th Usedom Music Festival will discover the extraordinary diversity of Estonian music from 21 September to 12 October. Guests are international stars, such as the currently best-known conductor dynasty – the Järvis. For the first time they will meet at a music festival in Germany: Neeme, Paavo and Kristjan Järvi from Estonia dominate teh festival’s Peenemünder concerts. The legendary conductor Kurt Masur tunes in to the festival season in a special concert prior to the festival on 13 September. For the first time four great symphony concerts on the historical terrain of Peenemünde will take place on the island of Usedom with the major conductors. The Usedom Music Festival expects outstanding orchestras: the NDR Symphony Orchestra, the Bremen German Chamber Philharmonic Orchestra and the Baltic Youth Philharmonic – another premiere at the Usedom Music Festival.

Other guests are the renowned ensemble Hortus Musicus, Maarika Järvi, Leipzig String Quartett, Wojciech Waleczek, the cellist David Geringas, the Notos Quartett, Ensemble Resonabilis or stylistic multi-talents, such as the Estonian jazz pianist Rein Rannap. Estonia is the land of the "Singing Revolution", therefore the world‘s top choirs are invited: the Estonian Philharmonic Chamber Choir, the Estonian National Male Choir or the Ensemble Vox Clamantis. In more than 35 concerts at 27 venues across the island of Usedom from medieval music, to romantic symphonic music, the spectrum stretches to contemporary music of the last 40 years.

The 2013 season promises a diverse programme that not only offers insights into Estonia‘s great musical tradition, but also celebrates this year’s anniversaries of great composers, such as Richard Wagner, but also Witold Lutoslawski and Benjamin Britten. The most famous Estonian is the composer Arvo Pärt. His works are found throughout the programme. The festival’s youngest guests are invited to participate in ambitious children’s concert of the Young Usedom Music Festival: the Cool School Symphony and other concerts.

In cooperation with the Estonian Embassy three events takes place: A lecture with music by musicologist Prof. Dr. Kristel Pappel and Harry Liivrand (Estonian Cultural Attache) framed by the piano duo Mikkalai-Rattassapp. Two exhibitions show contemporary Estonian art: “Looking through the wall“ – lithographies and photographies of Estonian artist Mare Vint, and an exhibition with colourful works of the Estonian born painter Margus Meinhart. Visitors can also join in on an island tour with the Insomnia Kvartett, or experience Boogie-Woogie with the Boogie Blasters on a voyage along the beautiful pommeranian coast.

In addition, on 23 August, the Usedom Music Festival, in cooperation with the Schleswig-Holstein Music Festival (SHMF), will produce a special concert in the Kaiserbädersaal – this year for the sixth time. The executive director of the SHMF and conductor Rolf Beck will lead the Schleswig Holstein Festival Choir and famous singer.

Information and ticket booking under +49 (0) 38278/34647 or www.usedomer-musikfestival.de, www.usedom.de as well as with numerous Tixoo ticket sales offices in Germany, Austria, and Switzerland. 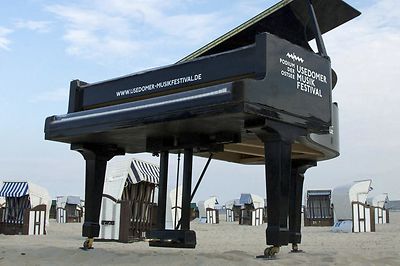