(By Jurriaan Cooiman) Incredible! It is incomparable to anything I have done so far: picked from the airport by two police cars, followed by what seemed to be a high speed race until… the police got stuck in the traffic jam too. The security logic seems backwards; just get the car in between the two police cars and you could have killed someone “important”… I was on my way to the first Forum organised by FestArab , the umbrella organisation for festivals in the Arab world. A group of students from the fields of culture, education and tourism were invited to discuss “Cultural events as a tool for dialogue, social integration and economic growth” with professionals from the cultural sector.

The place where the absolute beginning of humankind’s (agri-)culture was born has suffered severely in the last 30 years of isolation, and now very slowly tries to escape that damned corner.

Nothing starts on time, musicians were prepared but it then started almost one hour late.

The next morning: a conference on cultural heritage, architecture and tourism. The same. But I am struck by the strong philosophical and charismatic personalities of the speakers. They are all above 70, and all possess a great awareness of the situation and feel the strong need to do something. Some younger participants in the audience did not speak up but were at least addressed (they dream that Iraq gets its cinema back!).

There is a huge need for inter-cultural, inter-religious, inter-social and inter-generational dialogue!

Access to culture, mobility – all things they have to start with if the cultural heritage and contemporary arts productions are supposed to have a chance to develop. With its oil resources and the possibility to benefit locally from its exploitation, in 10 years time Iraq can be the strongest country in the region. Then, hopefully the country will be able to reconnect with its important past (Babylon, Mesopotamia, Gilgamesh etc.) but also act as intermediator in this tense region on this planet.

For the moment, cultural exchanges such as co-productions will remain basic: people to people or 0.0! Is EFA ready for this too? I hope so. And I want to come back here and then see more than just our “prison” Hotel Ishtar!

Read part two: “Back from Baghdad“!

(Written by Jurriaan Cooiman for the EFA Blog Festival Bytes) 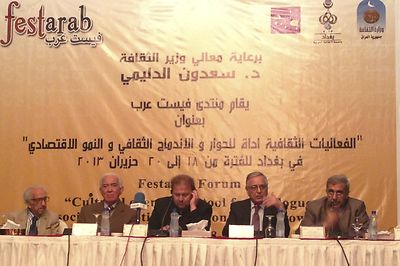