New on Festival Bytes: Back from Baghdad

(By Jurriaan Cooiman) On our last evening of the FestArab Forum in Baghdad we attended a concert with a Spanish flamenco guitar player and singer and an Iraqi Oud player and Poet in one of the last or first (?) cultural centres in Baghdad. The highlights were the differences in ornaments in playing around one tone in two cultures: filigree and over-aesthetic on the one hand and full of time and deep emotions on the other.

Then, a long drive to find the Oasis like Luna Park, near by the river, with many restaurants (air conditioned, at least late at night), sprinklers every five meters – as if we sit in complete fog, but in a multi-coloured, bright surrounding with many, many families… I met a Bahai religious family. They left Islam and now cannot live what they believe in.

Bagdad is different from what the media tries to make us believe: eight million people live their lives here!

I had a long conversation with the director of protocol of the Ministry of Culture, who has just come back to Baghdad after four years in the US where he was the director of the Iraqi Cultural Centre in Washington DC. We spoke about politics, the military (in these countries one of biggest problems is that they are not in one hand, the parliament, and there is a permanent danger that they do not agree and then the generals in one of the regions do what they think is right), the reactions of the West to the civil war in Syria etc.

If we make the 2015 edition of the CULTURESCAPES festival about the Near East region (really our perspective), covering countries such as Lebanon, Palestine, Jordan, Iraq and if possible and existing Syria, I need more of those evenings and trips!

As I wrote in my previous blog, getting into the city of Baghdad is quite a thing, but getting out of the country, meaning first of all getting to and into the airport, is almost impossible:

I try to sum up the events of this morning: “Please, please be in the lobby not later than 6.30am. The driver will be there, and at 9.50am you have your Turkish Airlines flight to Istanbul.” The driver arrives at 7.15am. Then, four controls, one with all doors open and a dog sniffling for explosives. About two kilometres ahead of the airport, we have to stop: “Wrong vehicle!” The car is not registered for entering there. The driver turns around, calls and tries again. This exercise is repeated four times…

Michel Bourdoncle, the pianist of the concert with Darko Brlek on the Clarinet, gets nervous and also calls. “Don’t worry, all will be fine!” We wait and then a sign: we get a very little piece of paper with a number and now we can follow the VIP line.

We arrive at the airport, at least 39 degrees outside, a long queue of people with their luggage who want to get into the (air conditioned) building. Our driver puts us in front of this line, the other people are not happy. The luggage is scanned, another dog sniffing our suitcases. Out of nowhere our driver appears again and takes our passports! Michel gets more nervous, what if… The driver eventually comes back, leads us to the regular Turkish Airlines check-in (how can they do normal work there?), all seems fine, only the passport controls fail. Our driver puts us again in front of the one and only point for foreigners, all their checks are for Iraqi, and, yes, we eventually enter the terminal 50 minutes before the flight takes off.

Istanbul-Zurich-Basel. Being back, I think: we live in a park here.

(Written by Jurriaan Cooiman for the EFA Blog Festival Bytes) 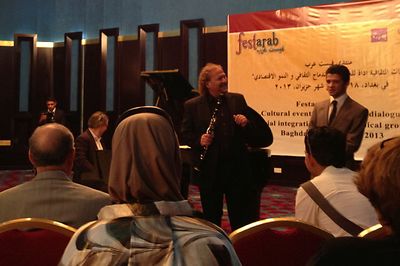