The centre of experiences: 61st Ljubljana Festival kicks off today

The 61st Ljubljana Festival begins on 27 June 2013 at the picturesque Congress Square with a project that will unite different artists and art forms. To appear there as soon as the next day, is the currently most popular and sought after musical duo 2Cellos. The other exceptional artists, who will make Ljubljana – according to our new slogan – “the centre of your experiences” until the 10th September will be Béjart Ballet, the Leipzig Gewandhaus Orchestra with Maestro Riccardo Chailly, Mariinsky Theatre St. Petersburg with Maestro Valery Gergiev, Russian choreographer Boris Eifman and his eponymous Ballet Ensemble, extraordinary performers from the London's West End and many others. The programme of the 61st Ljubljana Festival also pays tribute to the 200th anniversary of the birth of the two musical giants Richard Wagner and Giuseppe Verdi and puts its focus on Russian culture.

The opening of the 61st Ljubljana Festival will take place on the Congress Square with a music and visual performance that combines different artistic practices and nations. It will feature the Purpur Orchestra, Ivan Goran Kovačić Academic Choir, Choir of The Croatian National Theatre Zagreb, Orchestra of The Slovenian Armed Forces and soloists under the baton of Ivan Repušić, who will be joined - in Bruckner's Te Deum, Wagner’s lohengrin Prelude to Act III, Verdi’s Gypsy Choir from The Troubadour and Tchaikovsky’s Overtur 1812 - by the bells from the churches in Ljubljana. The attractive visual part of the performance will be provided by the famous Austrian ensemble Ars Electronica. To appear the next day on the same square with the Slovenian Philharmonic is the currently most popular and sought after musical duo 2Cellos.

“Placed at the centre of our programme this year are the anniversaries of two musical geniuses – the 200th birth anniversaries of Richard Wagner and Giuseppe Verdi - and also the exceptional artistic creativity of Russia. As far as the great Wagner is concerned, we are extremely proud to announce his epoch-making production The Ring of the Nibelung. The first two parts of the famous tetralogy – The Rhine Gold and the Valkyr (2. 3. 9.) – will be performed by the Mariinsky Theatre St. Petersburg under the baton of the Festival's now already regular guest conductor Valery Gergiev. The other two pieces will be presented within the Festival's programme next year,” says Artistic and General Director of the Ljubljana Festival Darko Brlek. Valery Gergiev, who is arriving in Ljubljana at the personal invitation of Mayor of the City of Ljubljana Zoran Janković, will perform at this year's Festival three times. The musical connoisseurs will enjoy yet another concert with the Orchestra of the Mariinsky Theatre, to present among other the Wagner's overture to Tannhäuser (30.7.).

The tribute to Verdi will be paid by the Slovenian Philharmonic Orchestra, Slovenian Chamber Orchestra, ensemble of the Slovenian National Opera Theatre Maribor and soloists with their performance of Requiem (9.7.). The soloists of the Accademia Teatro alla Scala, accompanied by the RTV Slovenia Symphony Orchestra, will sing a selection from his renowned operas (11.7.).

Russia's rich heritage will be also presented by the St. Petersburg's Mikhail Ivanovich Glinka Choir, which will spread the spirit of the 61st Ljubljana Festival beyond the borders of the Slovenia's capital with its guest appearances in Kostanjevica on Krka and Kranjska Gora (25.7.-27.7.). The Festival’s visitors will also be able to enjoy the performance by the famous Russian violoncellist Alexander Rudin, and eventually, the St. Petersburg's Boris Eifman State Ballet Theatre, which will present its ballet The Brothers Karamazov, signed by the famous choreographer Boris Eifman, will end the summer festival on 9 and 10 September.

Among the heights of the 61st Ljubljana Festival most certainly belong the two evenings with one of the oldest symphony orchestras in the world the Leipzig Gewandhaus Orchestra, which will be conducted by Maestro Riccardo Chailly. The famous orchestra will perform the Mahler's and Beethoven's 9th Symphony. The other Festival's memorable moments will be conjured up by the Slovenian National Theatre Maribor with the ballet Romeo and Juliet (1.7.), Béjart Ballet with four ballet pieces (4.7.), Bernarda and Marcos Fink with an evening of lead song (3. 7.), Queen of Flamenco María Pagés (18.7.) and many others.

On the initiative of the Mayors of Ljubljana and Trieste the Orchestra and Choir of the Giuseppe Verdi's Opera Theatre Foundation in Trieste will perform Rossini's Stabat Mater and thus highlight the friendship among the two cities. This performance is a gift from Trieste to Ljubljana.

The summer ease will be additionally marked by the Musical Grease by Jim Jacobs and Warren Casey, conceived specially for the stage at Križanke, within the Bronowski production at the London's West End.

In this year's addition, the Ljubljana Festival continues to focus its attention on the education of young artists and children. Thus an important part of its programme is the Branimir Slokar Academy as well, featuring this year again an enviable number of master classes with participants from all over the world. It also gets on with its programme of free workshops for children and young people in the field of fine arts, music, movement and musical.

The programme of the 61st Ljubljana Festival places its bet as on tradition and experience as well as on freshness and novelties. It enters its new season with an updated image, provided by the Agency Luna\TBWA. Youthful colours and bold exposure of the Ljubljana Festival and our capital as ‘the centre of experiences’ in Europe and the world reflects the programme that brings to our stages the artistic delights from far and near as well as our wish to bring in not only more domestic but foreign visitors as well. “And it is not an impossible dream, since every summer Ljubljana is visited by an increasing number of foreigners, wishing to include the cultural experiences in their tourist programme as well,” explains Darko Brlek. “And this desire of ours is not new at all. It was already back in 1972, when Dr. Fran Vatovec said that their wish was to ‘imbue the Slovenian capital with cultural summer events that would celebrate its name all over the European cultural world’.” 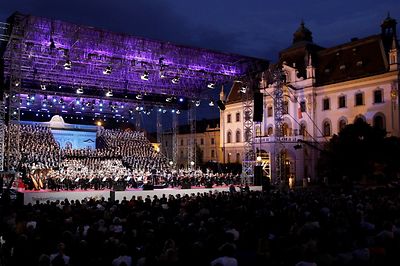