Pavol Liska and Kelly Copper, the two heads of the Nature Theater of Oklahoma are guest performing in Berlin. At a press conference to raise the curtain on the Berliner Festspiele’s Foreign Affairs summer festival (27 June – 14 July 2013) they presented their work and were on hand to answer questions about their work. Together with the HAU Hebbel am Ufer, Foreign Affairs has invited the New York theatre group Nature Theater of Oklahoma to realise a large-scale theatrical project: in the HAU 1, alongside their stage piece “Romeo and Juliet”, they will be showing their grand “Life and Times” epic, including two new episodes. For the entire festival, the company calls upon all Berliners – analogous to Kafka’s call in “America” – to become part of the theatre: “Anyone who wants to be an artist, step forward! We are the theatre that has a place for everyone!” (based on Franz Kafka). Those who step forward will produce a film and a new part of the Life and Times together with the Nature Theater of Oklahoma.

“We see ourselves as creators of a social model. It’s more than art, it’s a social sculpture.” Pavol Liska will live and work with the Nature Theater of Oklahoma for three weeks at the HAU1.

New Artistic Director Matthias von Hartz has invited over 30 international artists and projects to Berlin. He and his team are particularly looking forward to the opening weekend, which features four German premieres, concerts and a spectacular party on the main stage. Among the shows, works by Anne Teresa De Keersmaeker with Boris Charmatz, Angélica Liddell, Philippe Quesne / Vivarium Studio, Gravenhurst, Christeene, and Will Bankhead can be seen, among others.

A main focus of the festival is on William Forsythe, whose interdisciplinary work, two large stage pieces, “Sider” and “I don’t believe in outer space”, and several Choreographic Objects will be presented in Berlin. Among these is the spectacular “White Bouncy Castle”, which is open every day as summer entertainment for the whole family in the Lokhalle Schöneberg: “As soon as you enter the castle, the dance has already begun.” In a joint work with Dana Caspersen, William Forsythe created the monumental, over 30-metre-long installation resembling a huge, white bouncy castle to a soundtrack by Joel Ryan.

With its Focus: The Bet, “Foreign Affairs” will explore current social-political themes in theoretical and artistic-discursive projects jointly with the KW Institute for Contemporary Art. International academics and artists will represent different positions on the theme of betting in the economy and society, and individual projects will be explicitly produced for the festival. International visual artists, theatre-makers and theoreticians will show their work on the ubiquity of speculation in an exhibition and a weekend of installations, lectures and performances. Collaborators are Santiago Sierra, Richard Sennet and Saskia Sassen, Elena Esposito, Forced Entertainment, Goldin&Senneby, the geheimagentur with Joshua Sofaer, Hadley+Maxwell, Joseph Vogl and many more.

For the first time, Music forms an independent segment in the Foreign Affairs programme, curated by Martin Hossbach. Gravenhurst starts the series of concerts on Thursday, in which Apparat and The Notwist, Advance Base (Chicago), Emika (Berlin), Heatsick (Berlin), Anika & Dirty Beaches (Berlin) all feature. Apparat will present its album “Krieg und Frieden” (Music for Theatre) for the first time, which they are currently working on in Berlin and Emika will perform from her brand-new album “DVA”. On Saturday, 29 June, Foreign Affairs will be hosting a huge party to kick off the festival: “Horst Krzbrg in Exile: Objekt, Will Bankhead, Christeene (live), Philip Sherburne and many more”, jointly organised by the founder of the Horst Krzbrg Club, Johnnie Stieler.

Alongside the Haus der Berliner Festspiele and the Lokhalle Schönberg, Foreign Affairs also invites you to its partner venues, the HAU Hebbel am Ufer/ HAU 1 and the KW Institute for Contemporary Art.

Ticket prices range from € 7 to € 35. There are also individual subscriptions and combined admission tickets. Tickets: at the box office – telephone (030)25489-100 – and online at www.berlinerfestspiele.de/foreignaffairs 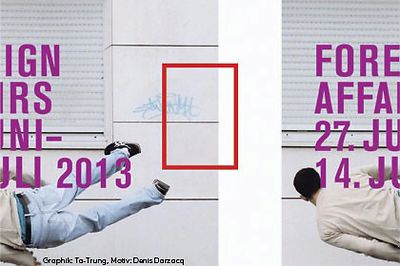