The 26th Rheingau Music Festival will run from 29 June to 31 August 2013. Apart from the main programming themes “Wagner & Verdi: 200th anniversary”, “Next Generation” and “Family get-togethers” the Composer & Artist in Residence Fazıl Say and the Artist in Residence Sol Gabetta.

159 concerts at 45 venues throughout the Rheingau and its neighbouring regions have been scheduled. The principal venues are Kloster Eberbach (Eberbach Monastery), Schloss Johannisberg (Johannisberg Palace) and the “Kurhaus Wiesbaden” (Assembly Rooms). Numerous castles, churches and wine estates are among the attractive venues with a specific regional character, such as the Seebühne of Schloss Vollrads (a stage in a pond) and the Steinberg vineyard below Kloster Eberbach. New venues will be the Alte Färberei im Industriepark Höchst and the church St. Peter und Paul in Hofheim. After some years intermission there is a concert in the church St. Vincentius in Eltville-Hattenheim.

“You’ve simply got to listen to him, the boy plays like a demon”, is what Aribert Reimann is supposed to have said to David Levine in 1987, after hearing the 17-year-old Fazıl Say on the piano ... The German composer’s discovery gave Fazil Say an immediate place in Levine’s master-class at the Robert-Schumann College in Düsseldorf. His pianist’s heart-beat is quickened by the Viennese classics, works by Mozart and Beethoven are part of his core repertoire, but so is Mussorgsky’s “Pictures from an Exhibition”, the compositions of Maurice Ravel or Gershwin’s Piano Concerto. The eclectic inclusiveness, and this natural genius, mean that Fazıl Say has always been predestined to kick off our new festival series called “Composer & Artist in Residence”. On four evenings, he will be able to showcase his multifaceted musical talents as a chamber musician, a composer, a pianist and a conversationalist, creating a rounded portrait of an exceptional talent.

She’s been dubbed the Princess of the Cello, an elven enchantress in the world of music: Sol Gabetta, daughter of Franco-Russian parents, born in the Argentine city of Córdoba, captivates and illumines the music scene worldwide with her inspired playing, her charismatic personality and her infectious joie de vivre. As the “Artiste in Residence”, she is in this year’s “Summer full of Music” one of the most lustrous luminaries to grace the stage. Together with her precious Guadagnini cello, made in 1795, on which Sol Gabetta sings with incomparable artistry, she will undoubtedly be enthralling audiences in three concerts and a “Rendezvous”.

The twin luminaries in the operatic firmament, Giuseppe Verdi and Richard Wagner, are permanent fixtures on the world’s stages. Both of them born in 1813, the one in the Italian town of Le Roncole, the other in the Saxon city of Leipzig, enchanted generation after generation with their works, and developed new utopias of musical drama, “Music of the Future”. After their deaths, contrapuntally contrasted as the epitomes of Italianitá and Deutschtum, of melody and harmony, even today they are a divisive issue for opera fans worldwide: Tosca or Elsa? Scala di Milano or Bayreuth? Though in terms of geographical focus, they were not all that far apart: the sight of the Mediterranean in Genoa is said to have inspired Richard Wagner to write “Rheingold”, while it was in Palermo that he completed his “Parsifal”, and he spent many months in Venice. And yet the two composers never actually met. Although the author Franz Werfel, in his novel entitled “Verdi”, at least conjured up a fictitious yet verisimilitudinous encounter during the Venetian carnival.

Unsurprisingly, the children in musical families like the Bachs or the Mozarts always owe their success to an interactive synthesis of innate and nurtured talent, plus some special encouragement into the bargain. If little Wolfgang Amadeus had not been introduced to music-making and composing at so early an age by his father Leopold, and forced to practice, who knows whether today he would be able to delight in his numerous operas and symphonies, or whether we would have ended up owning a casino? At the Rheingau Music Festival, we are this year organising a special series of “family get-togethers”, bringing together musical brothers, sisters, aunts and nephews in trios, duos or quartets. Like father, like son ...

The “Youth Meets Up”, “Classics Marathon” and “Next Generation” programmes are designed to encourage and showcase young, new or hitherto undiscovered talents, up-and-coming performers and virtuosi, of whose gifts and future careers we are confidently persuaded. Fortune favours the bold – since not infrequently the global stars of tomorrow are discovered here, writing history with their performances, their projects and their concerts.

The 26th Rheingau Music Festival kicks off on 29 and 30 June in the traditional setting of Eberbach Monastery’s Basilica. The HR Symphony Orchestra, with its principal conductor Paavo Järvi, will lose no time in honouring the keynote theme of Richard Wagner, marking the 200th anniversary of his birth, by performing his “Wesendonck Lieder”, WWV 91A, and Gustav Mahler’s Symphony No. 6 in A Minor. The solo part will be sung by the mezzo soprano Anne Sofie von Otter. HR2-Culture will be broad-casting the concert live on 29 June, while HR-TV will be showing a recording of the concert on 30 June at 8.15 p.m., and 3sat will be broadcasting it at a later date.

The festival ends on 31 August with Mendelssohn’s “Magnificat” and Symphony No. 2 in B Major, Op. 52, the “Hymn of Praise”. In addition to a quartet of soloists, the Neubeuern Choral Society will be performing, together with the KlangVerwaltung Munich Orchestra, conducted by Enoch zu Guttenberg.

For all programme highlights visit www.rheingau-musik-festival.de 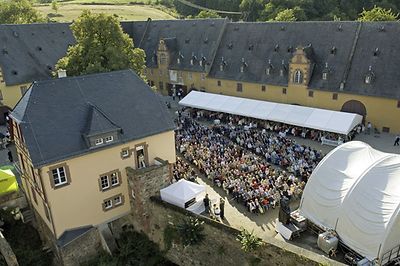