Festival d'’Aix and the Mediterranean: from classical myths to contemporary challenges

This year the Festival d’Aix (4-27 July 2013) will celebrate the anniversaries of four major musicians, Verdi and Wagner, Britten and Poulenc. Most importantly, it will also bring its own specific contribution to the Marseille-Provence 2013, the European Capital of Culture project. Having shared goals and values ever since its early developments, the Festival intends to turn more towards the Mediterranean basin, at once so close and so distant.

Made of dreams and nostalgia, tears and hope, the Mediterranean is to us a space that separates and links three continents. It represents a long history of migrations resulting in a unique cultural melting pot, a rich collective memory and a fabulous shared heritage. This year’s programme will thus be the opportunity for a fruitful dialogue between modernity and tradition, between legacies and insights into the future. The Festival will feature a number of mythical figures: Clytemnestra and her daughter Elektra, the beautiful Helen, whose elopement with Paris set off the Trojan war, and nearer to us, Don Giovanni, Romeo and Juliet, the court jester Rigoletto and his daughter Gilda…

At the Grand Théâtre de Provence, Patrice Chéreau and Esa-Pekka Salonen will revisit Strauss’s Elektra. At the Archevêché theatre, Robert Carsen and Gianandrea Noseda will offer their very personal interpretation of Verdi’s Rigoletto, while Don Giovanni returns staged by Dmitri Tcherniakov and conducted by Marc Minkowski. At the Jeu de Paume theatre, Leonardo García Alarcón and Jean-Yves Ruf will recreate Cavalli’s Elena, a Venetian opera that has not been performed ever since it was written in the 17th century. One year after the spectacular success of Written on Skin, Katie Mitchell is taking on the staging of The House Taken Over, a world creation by Vasco Mendonça. She will be using the setting of the age-old bastide of the Grand Saint-Jean, as it seems to come straight out of the Cortazar novella that inspired the composer.

The London Symphony Orchestra, in residence at Aix for its fourth year, the Orchestre de Paris, the Gulbenkian Foundation Choir, the Jerusalem Quartet, and many more prestigious soloists and musical ensembles will perform Wagner, Mendelssohn, Janá?ek, Mozart, Britten, Milhaud, and many others composers.

The European Academy of Music will bring together more than 200 young artists from around the world and will offer professional training, interdisciplinary workshops, musical creations, concerts and operas. It will celebrate the works of Poulenc and Britten as well as Venetian baroque music.

The intensity of the Festival’s and Academy’s activities in June has led us to design a prelude to the Festival, the « Festival d’Aix IN JUNE », which comprised twenty or so concerts, master classes, pedagogical activities, and other events designed to reach the Provencal public, young people, schools and cultural organisations.

The Orchestre des Jeunes de la Méditerranée (OJM) will hold its summer session in partnership with the LSO. About one hundred musicians recruited across 20 countries around the Mediterranean will perform Prokofiev’s Romeo and Juliet, a ballet with 120 young dancers choreographed by Josette Baïz and directed by musical conductor Kristjan Järvi. At the Camp des Milles, formerly an internment camp for Jews and now a world war II memorial, Krása’s opera Brundibár will be performed by children, just as it was in the ghetto of Theresienstadt.

For many years now the Festival d’Aix has been committed to promoting dialogue between different cultures: traditional and recent, popular and highbrow, from Southern Europe, North Africa and the Middle East. This year, Jasser Haj Youssef will enlist young string musicians to consolidate his own quartet, while the Belgian jazzman Fabrizio Cassol will invite musicians from various origins to participate in a musical creation, which will echo murmurs and rumours reaching us from Cairo’s Tahrir Square. 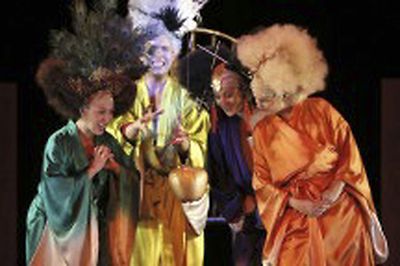