[By Nadin and Kathrin Deventer] The National Arts Festival in Grahamstown is 39 years old. It showcases South African artists and arts, and international artists coming together for 11 days in Grahamstown, a small city in Eastern Cape in South Africa with a population of 124,758: 44 venues, hundreds of performances from theatre, dance, music, jazz, comedy, and film, as well as a big fringe programme, in the middle of winter time (yes, it is freezing when the sun goes down….).

Some things we learned and discovered during our 6-day stay in Grahamstown:

Reflecting the past, trying to understand the present, giving a vision for the future.

It is the storytelling… it is authentic, it is real: you cannot change the world, but you can change one person’s life: catch the moment in time!

There is a need for this festival. It is a great meeting point for the African and international artistic community. It is a place for young people to discover the arts: incredible how many young people from all over South Africa attend the festival; how many people went to the performances at 10.00 in the morning; five to six shows every day was something quite usual for the festival audience; every day finishing at the ‘Long Table’ for an after-day-talk. Sure, there is a lot to be done to make this festival a festival for all in the city: sometimes, the strong police and security presence seemed to ‘protect’ us from the ‘real Grahamstown people’ living on the street…

What do we know? What do we do? Where is Europe in all this?

It seemed to us that Europe is so busy with itself. Why theatres refuse highly political pieces saying we are not dealing with this issue anymore… does that show Europe is not moving anymore?

We are responsible in this world of interdependence, of connectivity, of communities that are living together. And this is what we will bring back from Grahamstown. What can we do? What would we do? What do we have to do?

We travelled more than 7000 kilometres and 10 hours from one side of the globe to the other. And no, we didn’t travel around, we didn’t see the impressive countryside, national parks, the Indian ocean or the lions… We spent our six days in freezing Grahamstown, the festival city of South Africa. We experienced a powerful, colourful, inspiring journey through a rich cultural tradition, burning social and political questions and life, adjusting our own limited European perspective and questions we pose on society as just one little part of a much broader perspective. Us and the others for a big deal. We say good bye, Sala kahle – Sala kakuhle, and tot ziens! 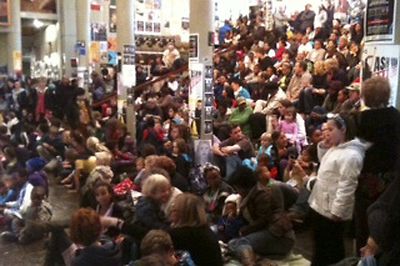