In the presence of the Prime Ministers of Estonia (Andrus Ansip), Latvia (Valdis Dombrowskis) and Lithuania (Algirdas Butkeviius) the 100 young musicians of the Baltic Youth Philharmonic from countries around the Baltic Sea open up the Baltic Focus of Europe's largest festival for classical music in Kiel Castle on July 13 and in the Elmshorn Riding Hall on July 14 with conductor Kristjan Järvi from Estonia, Baiba Skride, one of the most distinguished violinists of our time from Latvia and the Lithuanian cellist Edvardas Armonas. The Baltic Youth Philharmonic and its conductor take part in the Schleswig-Holstein Music Festival (under the motto "moving baltic" ) for the first time.

Kristjan Järvi, the artistic director and founding conductor of the BYP: "It is the Baltic Voyage that has its starting point from Germany celebrating three living trailblazers of the Baltic States...Tüür, Gelgotas and Kalnins. A concert that brings Central and Baltic music traditions together". The programme starts with the symphonic poem "Don Juan" by Richard Strauss followed by Johannes Brahms' Double Concerto. With "Never Ignore the Cosmic Ocean" by the Lithuanian composer Gediminas Gelgotas, the Symphony No. 3 of the Estonian composer Erkki-Sven Tüür and the first part from the rock symphony of the Latvian composer Imants Kalnins the concert presents music which combine compositional techniques and styles from classical music to rock and hiphop in an inspiring way.

For six years the annual tours lead the orchestra geographically through Europe and musically through the countries around the Baltic Sea: After the opening concert on April 25 in Russia (Kaliningrad, Moscow) and the opening of the Baltic Focus of the Schleswig-Holstein Music Festival, two performances at the 20th anniversary of the Usedom Music Festival will follow. Usedom is the birthplace of the BYP. A special concert with the legendary conductor Kurt Masur and the participants of its international master class for young conductors (Peenemünde, 13.9.) tunes in the festival saison. Together with the Estonian bassoonist Martin Kuuskmann under the baton of Kristjan Järvi the BYP opens up the 20th Usedom Music Festival (Peenemünde, 21.9.), which is dedicated to Estonia and its distinguished musicians and ensembles such as Neeme Järvi, Paavo Järvi, Kristjan Järvi, the Estonian National Male Choir and the Estonian Philharmonic Chamber Choir. Intensive rehearsals (also known as "BYP Lab") complete the tour year: in addition to the master classes with Kurt Masur from September 9 to 13 the BYP intends to stage more workshops in conducting and composition with Kristjan Järvi and the composer Daniel Schnyder from September 24 to 25 in Peenemünde. 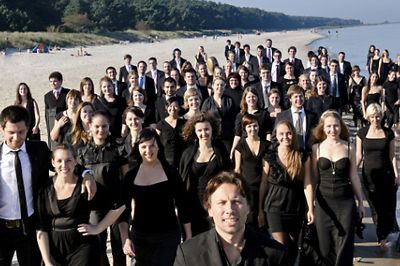