On 18 July, the 57th edition of the Menuhin Festival Gstaad took off for a seven-week voyage under the sign of “water”. The first week’s menu includes two of artist in residence Hélène Grimaud’s three concerts. French pianist Hélène Grimaud selected Beethoven’s Fourth Piano Concerto for the opening concert of the 57th Menuhin Festival Gstaad. She was accompanied by the kammerorchesterbasel, an orchestra with whom she shares an uncompromising spirit and drive in service of the music.

For Saturday evening she has conceived a very original recital built around Alban Berg’s Sonata, Op. 1. The programme takes up the thread of a recording entitled “Resonances” that she made for Deutsche Grammophon that was released in 2010.

On Friday, 19 July, the orchestra from the Menuhin School of London will celebrate the 50th anniversary of the institution founded by the “violinist of the century”. It will also be an opportunity to discover one of the most promising young stars on the violin: Russian artist Alina Ibragimova. Not to mention the “Jeunes Etoiles” concert on Saturday morning: another young Russian, pianist Varvara Nepomnyashchaya, will open the series at the chapel in Gstaad with a programme featuring works by Handel, Schumann and Brahms.

Artistic director Christoph Müller has chosen the theme of “Water” as the basis for the approximately 50 concerts to be performed in the churches of the Saanenland, Pays d‘Enhaut and in the Festival Tent in Gstaad. The Festival will continue until 7 September and will conclude with the concert “Calm Sea and River Idyll” featuring Sascha, Lily and Mischa Maisky. Many established stars from the world of classical music are expected. At the same time, the 20,000 or so visitors to the Festival will also be able to discover new talents.

With the Festival theme of “Water”, the Elements cycle begun by Artistic Director Christoph Müller will be coming to an end this summer. After musical explorations of the themes of “Heaven and Earth”, “Fire and Sun” and most recently “Air” over the past few years, he wishes to use the 57th Menuhin Festival to communicate and express the theme of “Water” through music.

Like air, water in its most positive form is present in abundance in Gstaad and is part of the tourist experience there, says Director Müller. The trickling source of a mountain stream is just as fascinating as the roaring power of a waterfall (such as the Geltenschuss), “and every year we are amazed when we perceive the quiet raindrops on the Festival Tent more intensely than the pianissimo of the star conductor,” he chuckles. “And if the concerts can sharpen our appreciation of this most precious resource on our earth and stimulate people to think, then we will have acted in the spirit of the founder of our Festival, Lord Menuhin, for whom music was always more than just ‘listening’,” finishes Christoph Müller.

His musical programme for 2013 is again bursting with highlights. Stars who have attracted large audiences in the past will be returning, and new names will be appearing who have so far only come to prominence in the media and through recordings. Names of great female artists that immediately catch one’s eye include Angela Gheorghiu – thanks to the patron Aline Foriel-Destezet, one of the absolute highlights in the Festival Tent – Kristine Opolais, Sol Gabetta, Victoria Mullova, Sabine Meyer, Nuria Rial, Vilde Frang, Khatia Buniatishvili, Alina Ibragimova and Hélène Grimaud as “Artist in Residence 2013”. Then there are the male artists: Andràs Schiff, Jordi Savall, Joshua Bell, Christoph Eschenbach, Kristjan Järvi as Principal Conductor of the Gstaad Festival Orchestra with the Turkish star pianist and composer Fazil Say, one of whose works will experience its world premiere at the Festival, Mikhail Pletnev, Mischa Maisky, Andris Nelsons with the City of Birmingham Symphony Orchestra and, as an exclusive feature in the Festival Tent in Gstaad, an evening with “Film music of the oceans”, devoted wholly to the Festival theme of “Water”, a delight for all CINEMUSIC lovers...

In the summer of 2013, star pianist Andràs Schiff will again be offering a public master class (7-11 August). Everyone who spent some time in the Landhaus Hall last summer was fascinated by the intensity with which this Hungarian pianist trained young talents, preparing them to be future concert pianists. Under the title “Gstaad Vocal Academy”, mezzo soprano Cecilia Bartoli will again be holding a public master class in the Landhaus Saanen along with her mother and teacher Silvana Bazzoni-Bartoli (30 August until 4 September), with a final concert by the students in the Hotel Landhaus on the last day. 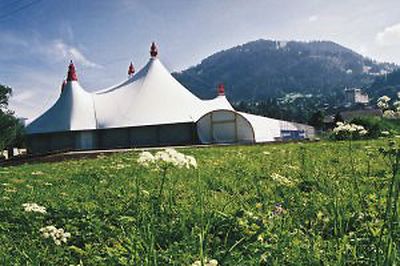