On 11 July 2013 in Warsaw, Poland, the first General Assembly on Forms of Imagination and Thinking for Europe of the European Union’s New Narrative for Europe took place to find new visions for Europe’s future through the input of representatives of a vast network of partner organisations. The New Narrative project aims to give artists, intellectuals and scientists a space for long-term discussion and expression about Europe. It responds to European Commission President Barroso’s recent call for 'more and better Europe' which he made during his State of the Union speech in 2012, and is part of expanding the public debate on Europe.

President of the European Commission José Manuel Barroso and Prime Minister of the Republic of Poland Donald Tusk opened the General Assembly. José Manuel Barroso underlined in his speech that a “New Narrative” is needed “to breathe new life into the European spirit and create a genuine European public space.” And added: “Of course there is what Europe can do for science and culture, but also what can culture and science do for you? What ideas can you bring, what new narratives can you write, what new images can you design so to inspire our young people?”

In three panel conversations speakers discussed the cultural values needed to make a common story, the role of Europe’s soft power (arts, heritage, science), and the image and role of Europe in a globalised and interdependent world.

Secretary General of the European Festivals Association (EFA) Kathrin Deventer is part of the Cultural Committee steering the New Narrative for Europe project. In the panel on the “Image and Role of Europe in a Global and Interdependent World” she linked her experiences as “A Soul for Europe” Strategy Group member and representative of the Cultural Coalition for a Citizens’ Europe to the discussion with civil society and cultural sector leaders on a new vision and identity for the European project, reflecting on its cultural values in the process of unification.

Kathrin Deventer stressed (watch her intervention here): “We must think of the image of Europe as a community of citizens. We must ask ourselves how do we bring about this community and are our national leaders ready for a real European public space.”

Philosopher Alicja Gescinska (watch her intervention here), an active contributor to the Cultural Coalition who participated in the European House for Culture’s Brussels Conversations 2012, stated in the panel on “What cultural values do we need to make a common story?” that “the value of democracy is not a new narrative, but an indispensable one. We have to repeat certain indispensable values. Europe is a haven of democracy and thus a moral project, not merely a political experiment.”. This is central to the aim of the Cultural Coalition, to base the new vision on the fundamental values that exist in Europe and are enshrined in the treaties.

The Cultural Coalition will offer the New Narratives for Europe project ideas and visions that are gathered through its partners’ interactions, discussions, and debates with citizens across Europe. Throughout the year, it will contribute by participating in the General Assemblies and taking up the issues at stake as conversation fodder throughout its own events, culminating in the “A Soul for Europe” Berlin Conference 2014: A Decisive Deal. The European Festivals Association will link its 2014 General Assembly and Conference to these discussions, which will be organised in a close partnership with the Cultural Coalition. It will take place from 26 February until 1 March 2014 in Sarajevo, Bosnia and Herzegovina, at the invitation of the International Festival “Sarajevo Winter”, as 2014 marks 100 years since the outbreak of the First World War.

Kathrin Deventer underlined the importance of synergies in this process: “The New Narrative for Europe project is a great opportunity for all of us involved to bring together the citizens we represent through our networks, including numerous visionary artists and intellectuals, to allow them to have their visions of the future of Europe heard. The crucial aspect is that the vision is fashioned by the citizens of Europe but strongly supported by their political leaders who can take the responsibility to provide a strong framework for their realisation.”

Watch the full webcast of the conference and find out more about how you can offer your vision to the New Narrative for Europe. 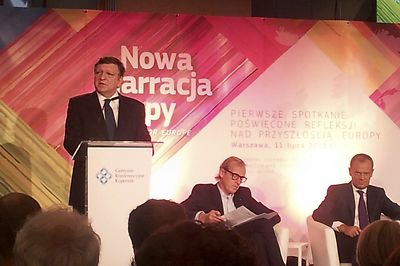