On 16 July 2013, the 27th International Izmir Festival organised by the Izmir Foundation for Culture Arts and Education (İKSEV) ended with the Apollon Musagéte Quartet concert which took place at the Celsus Library of Ephesus. Prior to the concert that started the events for the 600th anniversary of the Turkey-Poland Diplomatic Relations that will be celebrated next year, KSEV President of the Board of Directors Filiz Sarper presented an appreciation plaque to Consul General of the Republic of Poland in Istanbul Miroslaw Stawski.

The works that the Quartet has chosen from the contemporary and classical repertoire and their superior virtuosities received great admiration and applause. Four young artists thanked the applause with Stravinsky’s Tango. Apollon Musagéte members, who told that coming to the lands where their spiritual mentor Apollon was assumed to have lived and giving a concert here was an extraordinary experience, said that they were leaving Izmir with happy memories.

Kathrin Deventer, Secretary General of the European Festivals Association (EFA), said: “Attending the closing concert of the Izmir Festival in Ephesus, at the Library of Celsus, performed by the Apollon Musagéte Quartet, was breath-taking. Being introduced to this place, and other places in Europe, through the arts, discovering our rich cultural heritage and enjoying it with great contemporary music is a mission that the Izmir Festival is accomplishing so brilliantly this year for the 27th time.” 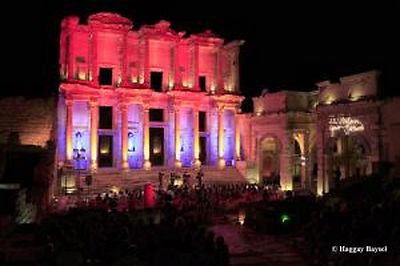