[By Kathrin Deventer] “Walls of Stone, Heart of Art” is the motto of this year’s 64th Dubrovnik Summer Festival. Yes: the walls are so significant when you enter the ‘fortress’ Dubrovnik, the Dalmatian Coast city dubbed “the pearl of the Adriatic” and dotted with beautiful Gothic, Renaissance and Baroque buildings. The Croatian city was among the first sites to be included in the World Heritage List in 1979.

Dubrovnik is very appealing to people looking for vacation from their busy work life, most probably for another purpose than the festival. Walking along the old city walls in July, smelling the sea and the fresh fried fish, tasting the wine, is a luxury, I thought. The beauty of this place is overwhelming.

It is the perfect setting for a vibrant outdoor festival.

Dubrovnik could be a sister of Avignon and its festival, despite being based in different parts of Europe and despite their different history, there is the same feeling of vibrancy. Both festivals are taking place in July, both are surrounded by historical walls, both are staging the most important performances in the city and its piazzas, and both are inviting people to discover the heart within the stones, or, as Kresimir Dolencic, the festival’s Artistic Director, writes in his programme: to discover “an invisible place of emotional images, timeless echoes of the plays, concerts and sounds of the people who are part of the city, who pay visits to it, and who offer it their finest art.”

As Avignon, Dubrovnik hosts a festival born out of the turmoil of World War II. This year, the 64th edition invites the public for almost two months to the city that acts as a stage for music, theatre, dance and opera performances, exhibitions, readings, writers gatherings, film screenings and reflections (for the first time, Kresimir Dolencic set up a collaboration with the Croatian Writers Society and a programme featuring several major writers) – a thrilling programme which intends to bring to the city young performers, new artistic creations, and big opera co-productions, a festival which both presents internationally renowned productions and collaborates with universities from all over Croatia to give young creators a professional platform to present their work.

In his career of almost two decades as a theatre director, Kresimir Dolencic started his directorship last December. He is an artist, and now also the director of the most important and oldest festival in Croatia. He knows how to “stage” the “heart” within the “stones” of Dubrovnik: He staged about 50 plays and operas in Croatia, Slovenia, the US and China. In 1994 the European Festivals Association (EFA) awarded him the Young Artists Denis de Rougement Award. He was engaged as a performance lecturer in Houston (Rice University), London (Trinity School of Music), at the Music Academy in Zagreb and as an assistant at the Academy for Dramatic Arts in Zagreb.

He gives a new touch to the festival – in his very personal way, and assuming a big challenge: to combine the walls of stone and the heart of art. If he had the chance to speak to the tourists coming to Dubrovnik and invite them to his festival, I am sure everyone would understand the motto of the festival.

Walking around in the old city, together with hundreds of British, Dutch, Norwegian and German tourists, made me wonder: How many of these people know about the festival and attend the performances? How many of them come to Dubrovnik just for the festival? How many know to appreciate the quality of the programme, the singers, the orchestras, and the productions? Who of them can appreciate the young soloist in the production “1813. Verdi vs. Wagner”, Lana Kos, born in 1984, the voce universale, Croatia’s most promising young soprano?

Maybe it is already a success that some of them buy a ticket for the seats set up in front of the St Blaise’s Church, and that some stop in a nearby café to take the time to enjoy the music. Yes, probably that is already good, and part of the educative mission of a festival: though the acoustics might not be top, and the birds could not care less to add their voice to the composition, the outdoor performances surprise many people who are just passing by and are thus invited to get in touch with the music.

Then I was thinking: How many of us coming to Dubrovnik know about its past, its role in the Yugoslav Wars, for example? Leaving the city walls and going up to the mountains overseeing the coast, I could not help but think about Dubrovnik in 1991.

Conflict and peace, beauty and ugliness, good and evil are so closely connected. To be in balance requires work, every day. It requires consciousness about both, the good and the bad; it requires memory; it requires vision for the future and a good sense of responsibility for all of us to contribute to and be part of a balanced life. There is no such thing as “natural” harmony, or beauty, or love: we have to learn to live it, to read it, to give meaning to it.

After I left, Kresimir wrote me an e-mail saying that they had an incredible, thrilling Romeo and Juliette production by the Slovenian National Ballet from Maribor for two days; so good that the festival organisers agreed to re-stage the production next year.

Let’s go again! And let’s make sure that more of those who spend time in Dubrovnik know about its heart, not only its stones. 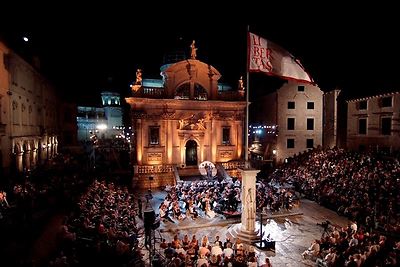