New on Festival Bytes: Past, present, and future: a mission of a city

[By Kathrin Deventer] Izmir would deserve to be host of the WORLD EXPO 2020: because of its 8500 years of history (definitely for that!), and because of its mission to contribute to the building of new routes to a better world, the theme of its bid. In Izmir, not only different cultures meet, but also past, present and future. This combination of history and contemporary meaning is brought to life through the active engagement and thorough work and proposals of the Izmir Foundation for Culture, Arts and Education (IKSEV).

Izmir is known for its thermal baths, its 300 days of summer, its natural beauty with beaches and ever-green forests, and also for the ancient villages and sites around the city. It is indeed the ‘pearl of the Aegean Sea’ (following my visit of the Dubrovnik Summer Festival located at the ‘pearl of the Adriatic Sea’, I had the privilege to extend my pearl collection). Thanks to IKSEV’s activities – in my case the visit of the International Izmir Festival – I was introduced to the past, the present and the future of Izmir.

The IKSEV Foundation, established in 1986 and headed by Ms Filiz Sarper, is contributing to the city’s identity: is not only running the International Izmir Festival, but also the Izmir European Jazz Festival, the Dr. Nejat F.Eczacibasi National Composition Contest, today one of the main arteries which nourish the polyphonic contemporary Turkish Music adding 150 new works to the music repertoire since 1994, as well as the MUZIKSEV Music Museum, with a fine concert venue, an amazing collection of music instruments, and the GÜNER ÖZKAN COLLECTION including authentic Turkish and Central Asian musical instruments.

There are many parallels between the missions of Izmir Foundation for Culture, Arts and Education (IKSEV) and the European Festivals Association (EFA). For example, the support of young artists and cultural actors has always been key in the Foundation’s activities. “Transfer of knowledge, giving opportunities to young generations, to new ideas, to creative formations lead festivals not just to be a stage that brings audience and artists together but a platform that enables education, cultural awareness, tolerance and better comprehension of the common denominators of humanity,” said Ms Filiz Sarper when the Foundation hosted the 2011 Atelier for Young Festival Managers which welcomed 40 young festival managers from all over the world to the city.

The Foundation is one of the driving forces behind the bid for Izmir as host of the WORLD EXPO 2020. The city is competing with Sao Paulo in Brazil, Yekaterinburg in Russia, and Dubai in the United Arab Emirates, and the winner will be announced in November this year.

It is not far-fetched to dedicate its 2020 WORLD EXPO bid to the topic of ‘health’: what is a healthy city? What makes our life healthy? Izmir gives the example.

Arts and culture are not immediately linked to this topic it seems at first sight. But in my opinion, and more and more studies reveal it, the impact of the arts, participation in the arts, or attending performances are an important contribution to a healthy society, to the development and progress of societal transformation, and to the well-being of people. Mens sana in corpore sano.

To raise awareness of this link is another common task of IKSEV and EFA. Cultural activities play an important role in enhancing the quality of life of the people living together in a city. With its artistic programme staged at ancient Ephesus, the International Izmir Festival is doing just that – while linking the past and the present. From 2 May until 16 July, the Izmir Foundation for Culture Arts and Education invited for the 27th edition of the Festival. The list of artists who had the privilege to perform in Ephesus City at the Great Theater of Antique Ephesus is remarkable! What’s more, this year, for the first time, the festival undertook major efforts to offer the programme to a broader audience.

The Festival combines its mission to preserve cultural heritage and the aim to reach out to new audiences: through the use of new technology, the concert of the New York Philharmonic, which was the first of the Orchestra’s European Tour, was live-streamed at the square outside the Ahmed Adnan Saygun Arts Centre with a very sophisticated sound system. “It was a sold-out concert; many people couldn’t get tickets anymore. For those, an LED screen was set up. A ‘7.1 dolby prologic 2’ sound system allowed to create a virtual concert-hall with perfect 3D sound – a real sense of deepness in sound isolated from the external noise. Almost 500 people experienced this great concert in the middle of Izmir,” explains Festival Coordinator Ceyda Berk.

Attending the closing concert of the Izmir Festival in Ephesus, at the Library of Celsus, performed by the Apollon Musagéte Quartet, was breath-taking. Being introduced to this place through the arts, discovering our rich cultural heritage and enjoying it with great contemporary music is a mission that the Izmir Festival is accomplishing so brilliantly this year for the 27th time. The present and the past, so prominently brought together, and the attempt to give a contemporary meaning to what characterises a city’s identity is the core of the mission of the Foundation!

Within the EXPO 2020, the Foundation would continue its ambition to raise artistic awareness in the citizens of Izmir and international audiences visiting the city.

Believing in the power of arts and culture, I think it would be a fantastic opportunity if Izmir hosted the EXPO 2020! 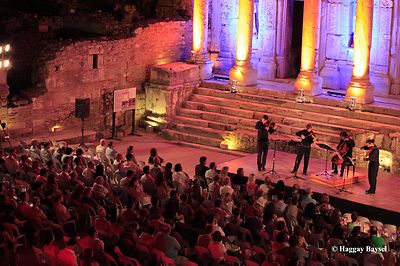