New on Festival Bytes: Technology seizes and shifts our perceptions of the world

[By Jackie Westbrook] “If it is the role of the artist to convert a strand of silver nitrate into a portrait, a sound wave into a memory, or an LED into a provocation, then we encourage you to come to Edinburgh in August for a very special occasion filled with pre-recorded mischief, virtual mystery and vivid make-believe,” said Jonathan Mills, Director of the Edinburgh International Festival, introducing the 2013 programme (9 August to 1 September). The artistic programme focuses on the relation between art and technology, a topic which is explored more in-depth in a series of talks and workshops.

Artists think differently; theirs is an inspiring contrast and essential provocation to habit, comfort, orthodoxy and progress. They exist in a fragile relationship with the world; somehow everything seen and heard, smelt, tasted and touched is transformed into moments of heightened intensity and sensuousness. Great artists absorb the circumstances of their surroundings, the prevailing shifts and shapes of our world, in weird and wonderful ways.

The pounding chords of the ‘Hammerklavier’ Sonata are a result of a collaboration of genius; between the ingenuity of piano makers such as John Broadwood and their fascination with materials and machinery; perceiving that the technological processes of an industrial revolution contained immense potential for the design of musical instruments; exciting the rebellious zeal of a composer like Beethoven who grabbed such an alignment of forces with immense passion to reveal new ways of thinking about sound and music.

Or the multimedia musings of a subversive spirit like Nam June Paik, determined to fashion out of an assemblage of abandoned objects a critique of consumerism and, simultaneously, an eloquent elegy for an electronic era.

My picks for you:

Composer Tod Machover, conductor Peter Oundjian and the Royal Scottish National Orchestra take us through the creation of a new piece of music celebrating the City of Edinburgh and its Festival and co-created by members of the public: Machover is creating the one-movement orchestral work, to be premiered on 27 August 2013, with sounds and impressions of the city and Festival given to him by people from around the world.

Award-winning theatre company Grid Iron fuses live interactive performance with innovative digital and new media technologies. Leaving Planet Earth is a site-responsive promenade production on an epic scale. Tracing the story of humanity’s first migration into space, it asks fundamental questions about our connection to this planet. Should we leave this world, and if so, who will endure and at what cost?

José Montalvo combines farce, burlesque and commedia dell’arte for the 21st century with urban and modern dance, film and slapstick comedy in his brilliant new show: Don Quixote, in his fifties, decides to achieve great things and finds himself in the dance halls, or Trocaderos, of Europe – traditional meeting and socialising spaces. Featuring acclaimed comic actor Patrice Thibaud and a spellbinding interplay of live dance and film projections, Montalvo’s latest work makes for an unexpected, surreal and intriguing take on Cervantes’s iconic novel.

This year Interfaces looks at how new developments in technology and everyday materials can influence artists’ work and how through their work we potentially reconsider our surroundings. Topics include the role of technology in global protest movements, the effect of technology on our relationships, the gamification of design, and how technology might be changing the human brain.

A new series in 2013 Movements explores interactions between music and technology with talks on topics including the evolution of the piano, the commissioning of music for cochlear implant users, Cybraphon the autonomous and emotional robot band, and music’s evolution since it became regularly recorded.

The Festival continues to develop its relationship with the University of Edinburgh in 2013 and introduces partnership events with Edinburgh College of Art. In addition to presenting Professor Nigel Osborne to give The Edinburgh University Festival Lecture: Art, Mind and Machine, and a panel including Dr Bettany Hughes we are running several events exploring cutting edge arts technology: Glitch’d Purposeful Mistakes and Synthetic Biology: Where Organic Meets Digital.

Beckett at the Festival

You can enjoy all 19 films that are the Channel Four Beckett on Film project, produced by Michael Colgan and Alan Maloney, and a series of talks and events exploring Beckett and technology.

(Written by Jackie Westbrook for the EFA Blog Festival Bytes) 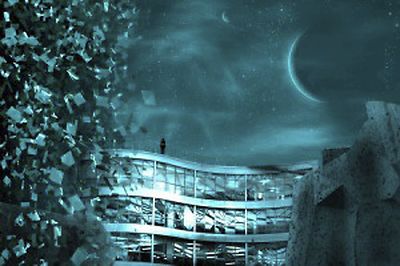