After a most successful tour of the No Borders Orchestra in August (Kotor Art Festival and Guitar Art Summer Fest in Herceg Novi, Montenegro; Trebinje, Bosnia and Hercegovina; and Ljubljana Festival, Slovenia), the NBO recorded a CD in the Slovenian Philharmonic Hall in Ljubljana for Universal Music (Deutsche Grammophon). Upcoming concerts will take place at the Kammerfest Pristina, Kosovo (10 October), at the Gala opening of the Culturescapes Festival in Basel, Switzerland (19 October), and at Radial System V in Berlin (20 October). Furthermore, the No Borders - No Nations exhibition “Ex-Ordinary” was kicked off (28 July – 4 August).

Next to the official concert during the Ljubljana Festival, the musicians of the NBO surprised passersby in Ljubljana with an unexpected performance. Check out the video on Youtube.

The No Borders Orchestra had been launched with a concert at the Opening of the 44th Belgrade Music Festival (BEMUS) on 11 October 2012. It is a collaborative project initiated by a group of well established festivals and music institutions operating within the borders of the former Yugoslav countries, following the idea of Premil Petrovic, conductor and artistic director of NBO, to establish a cross-border Symphony Orchestra. Today, the orchestra unites some 60 brilliant musicians from almost all music centres in the region, including Belgrade, Ljubljana, Zagreb, Sarajevo, Podgorica, Skopje, Pristina and Novi Sad.

Furthermore, the launch of the No Borders - No Nations exhibition “Ex-Ordinary” took place in Kanjiza in the north of Serbia (28 July – 4 August). The exceptional space of the Regional Creative Center Jozef Nadj was the perfect backdrop to challenge and inspire the artists and curators. The working sessions in Kanjiza were devoted to defining all technical details related to the exhibition which will appear in galleries in Sarajevo, Belgrade, Podgorica, Skopje, Pristina, Zagreb, and Ljubljana. On 18 September, the exhibition tour moves on to Sarajevo (Collegium Artisticum City Gallery); the Sarajevo stop will include a panel discussion on regional curatorial and artistic platforms, as well new aspects of cultural cooperation in the region. After Sarajevo, on 3 October, “Ex-Ordinary” will move to Belgrade anticipating the 45th edition of the BEMUS Festival.

The potential of the exhibition project lies in the collective work, in the consolidation of already existing collaborations but also in the initiation of new ones, not only between individuals but also between galleries and organisations, and in the creation of a new network which will result in new regional joint artistic actions. 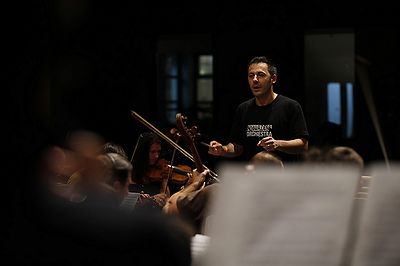