[Peenemünde / 13 September 2013] Music is his life: the European Foundation for Culture Pro Europa honors the world-famous conductor Kurt Masur by awarding him the European Cultural Prize 2013 for his artistic oeuvre and his lifetime achievements. The 86-year-old maestro will receive the award certificate and the prize sculpture on September 13, 2013 during the Special Concert commemorating the 20th anniversary of the Usedom Music Festival. The Foundation’s President Tilo Braune will present the award to Maestro Masur at the Power Station of the Museum Peenemünde at 8:00 pm, in the presence of the Usedom Music Festival’s Artistic Director, Thomas Hummel. The keynote address will be delivered by Prof. Siegfried Matthus, a renowned composer, dramaturge and longtime companion of the honoree, some of whose works were premiered by Kurt Masur. The concert and award ceremony form a prelude for the opening of the anniversary season of the Music Festival, which takes place on September 21 at the same venue and features the Baltic Youth Philharmonic under the baton of Kristjan Järvi. The festival runs until October 12, 2013.

The European Cultural Prizes honor outstanding achievements and special contributions in and for Europe. This year, the awards focus on Richard Wagner and the maintenance and revival of his heritage throughout Europe. Traditionally, the award ceremonies for the European Cultural Prizes take place under the patronage of the President of the European Parliament, Martin Schulz. Previous prize winners have included the conductor Daniel Barenboim, the actors Sir Peter Ustinov, Klaus Maria Brandauer and Armin Müller-Stahl, the opera star Plácido Domingo, the singer Thomas Quasthoff and the MDR Symphony Orchestra with its Chief Conductor Kristjan Järvi, as well as the MDR Radio Chorus.

The performance of the orchestra Baltic Youth Philharmonic, founded as an initiative of the Usedom Music Festival and Nord Stream AG, forms the finale of an international master class for young conductors led by Prof. Kurt Masur. He will alternate with the young participants in conducting the Fourth, “Romantic” Symphony by Anton Bruckner and Richard Wagner’s overtures to the romantic operas Die Meistersinger von Nürnberg and Tannhäuser. The Special Anniversary Concert is an event of the Usedom Music Festival in close cooperation with the Baltic Music Education Foundation e.V.

Tilo Braune, President of the Foundation Pro Europa, is looking forward to this particular setting for the award ceremony: “The Peenemünde Concerts at the Usedom Music Festival are an excellent framework for the award ceremony, made possible by the Festival’s Artistic Director Thomas Hummel,” Braune says. “After all, the Cultural Prize honors the great artist both for his life’s work as a conductor celebrated all over the world, but also for his many initiatives on behalf of young musicians. Furthermore, the Prize celebrates Masur’s humanistic philosophy of life and his part in the peaceful revolution in the GDR during the autumn of 1989.”

Artistic Director Thomas Hummel is proud that the former Gewandhaus-Kapellmeister, who has also been Chief Conductor of such renowned orchestras as the Dresden Philharmonic, the New York Philharmonic and the London Philharmonic Orchestra as well as the Orchestre National de France in Paris, took on the patronage of the very first Usedom Music Festival and has now become its honorary patron: “We are very grateful that a world star like Kurt Masur supports our Usedom Music Festival, located in the extreme Northeast of Germany in the border region with Poland, and honors us regularly with his presence and his performances. Therefore, the award ceremony for the European Cultural Prize is a perfect match with the 20th anniversary of our Festival.”

The anniversary of the Usedom Music Festival is marked by the expansion of European cooperation in the Baltic Sea Region. With the founding of the multi-national orchestra Baltic Youth Philharmonic, the Peenemünde Concerts and the Usedom Music Festival’s focus on one Baltic Sea country every year, excellent, world-class musicians have been appearing on the Baltic Sea Island of Usedom for twenty years, setting musical signs for peaceful coexistence within Europe.

The Peenemünde Concerts were initiated by the Usedom Music Festival, the North German Radio (NDR) and the Historical-Technical Museum Peenemünde. They fuel a special mission: where formerly rockets were designed and tested, now there is applause for music. During the “Third Reich”, the research station of the German Army and Air Force in Peenemünde was involved in developing “secret weapons” – including the so-called Aggregat 4 (also known as “V2”), the world’s first large-scale rocket. It brought death to many thousands of people, as well as the first successful launch of a space rocket. Peenemünde exemplifies the ambivalence of the development and use of cutting-edge technology like few other locations. Today, Peenemünde hosts a museum in the power station, cultural events, special exhibits, project days, workshops and work camps, and has become a venue for international encounters and peace pedagogy. The Peenemünde Concerts are unique on the German museum and festival landscape. They focus on humanity’s great themes – war and peace, freedom, love and life – themes the ambivalent location dictates. The internationally acclaimed concert series was launched on September 28, 2002: under the baton of Mstislav Rostropovich, more than 250 musicians performed Benjamin Britten’s War Requiem in the turbine hall of the former power station. Ever since, world-famous conductors have been continuing the series: Krzysztof Penderecki (2003), Christoph von Dohnányi (2004), Esa-Pekka Salonen (2005), Alan Gilbert (2006), Andris Nelsons (2007), Thomas Dausgaard (2008), Christoph Eschenbach, Neeme Järvi (2010), Kurt Masur (2012 and 2013) and Neeme, Paavo und Kristjan Järvi (2013) represent the high musical standards of the Peenemünde Concerts.

Some few remaining tickets for the concert on September 13 are still available at all known ticket sales points as well as via www.usedomer-musikfestival.de and by phone at +49.38378.34647.

Please direct all inquiries about accreditation and all interview requests to Alexander Datz, Media and PR, mobile: +49.176.74161157, a.datz@usedomer-musikfestival.de 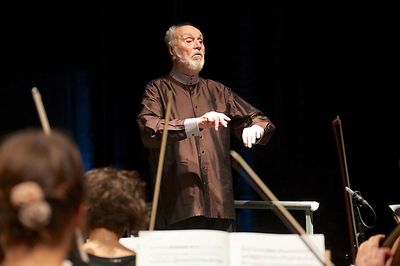