Kristjan Järvi and the Baltic Youth Philharmonic will open the 20th Usedom Music Festival in Peenemünde on September 21. Founded as an initiative of the Usedom Music Festival and Nord Stream AG, the multinational orchestra will perform Poème de l’extase by the Russian composer Alexander Scriabin, Ring ohne Worte, or Ring without Words, by Richard Wagner, based on an arrangement by Henk de Vlieger, and the Concerto for Amplified Bassoon and Orchestra by the Estonian Erkki-Sven Tüür. Every year the Usedom Music Festival presents the multi-faceted music of countries surrounding the Baltic Sea. The 20th Usedom Music Festival will discover the extraordinary diversity of Estonian music from September 21 to October 12. Its guests include international stars, such as the best-known conductor dynasty of our times - the Järvis. For the first time, they will meet at a music festival in Germany: Neeme, Paavo and Kristjan Järvi from Estonia dominate our Peenemünde Concerts. For the first time, four great symphony concerts at the historic compound of Peenemünde will take place on the island of Usedom with these major conductors. The legendary conductor Kurt Masur already launched the festival season with a special concert prior to the Festival on September 13. On this occasion, he also received the European Cultural Prize for his lifetime achievements. Furthermore, the Usedom Music Festival expects outstanding orchestras: the NDR Symphony Orchestra, the German Chamber Philharmonic Bremen and the Baltic Youth Philharmonic - another premiere at the Usedom Music Festival. Further guests include the renowned ensemble Hortus Musicus, Maarika Järvi, the Leipzig String Quartett, Wojciech Waleczek, cellist David Geringas, the Notos Quartet, Ensemble Resonabilis and stylistic multi-talents such as the Estonian jazz pianist Rein Rannap. Estonia is one of the countries of the "Singing Revolution", therefore some of the world’s leading choirs are invited: the Estonian Philharmonic Chamber Choir, the Estonian National Male Choir and the Ensemble Vox Clamantis. In more than 35 concerts at 27 venues across the Island of Usedom the spectrum ranges from medieval music to romantic symphonic music and contemporary music of the last 40 years.

At the opening concert audiences may look forward to a composition by a “real pioneer of Estonian music” and two “true giants” among German and Russian composers, says Kristjan Järvi. The Baltic Youth Philharmonic brings challenging repertoire to the Baltic Sea, making the transcending of boundaries programmatic: with Poème de l’extase by the Russian composer Alexander Scriabin and Ring ohne Worte, or Ring without Words – an amusing concert version of Richard Wagner’s Ring tetralogy, based on an arrangement by Henk de Vlieger – the BYP performs works by the creators of musical worlds for whom art became religion. “Each work should sound as if it had just been written. The musicians of the Baltic Youth Philharmonic live in different musical traditions. BYP is a truly European orchestra. More than anyone, they can do this in a fresh and exciting way,” says Kristjan Järvi. The Concerto for Amplified Bassoon and Orchestra by the Estonian Erkki-Sven Tüür was re-written at the initiative of bassoonist Martin Kuuskmann, who will perform it with BYP on the island of Usedom and in Venice. It rounds off the program, taking the instrument through various sound-worlds before “falling in love with a romantic elegy and a triad” (Tüür). This makes sense, as the former progressive rock musician Erkki-Sven Tüür appreciates diversity as much as the simplicity of folk songs: “We live in a time of pluralism, with many ideological tendencies.”

The 2013 season promises a diverse program that not only offers insights into Estonia’s great musical tradition, but also celebrates this year’s anniversaries of great composers, such as Richard Wagner, but also Witold Lutoslawski and Benjamin Britten. The most famous Estonian is the composer Arvo Pärt. His works are found throughout the programme. For the Festival’s youngest guests there are ambitious children’s concert of the Young Usedom Music Festival: the Cool School Symphony and other concerts to participate in. Three events take place in cooperation with the Estonian Embassy in Berlin: a lecture with music by musicologist Prof. Dr. Kristel Pappel and Harry Liivrand (the Estonian Cultural Attaché) accompanied by the piano duo Mikkalai-Rattassapp. Two exhibitions show contemporary Estonian art: „Looking through the wall“ - lithographs and photographs by Estonian artist Mare Vint and an exhibition of colourful works of the Estonian-born painter Margus Meinart.

The anniversary of the Usedom Music Festival is marked by the expansion of European cooperation in the Baltic Sea Region. With the founding of the multi-national orchestra Baltic Youth Philharmonic, the Peenemünde Concerts and the Usedom Music Festival’s focus on one Baltic Sea country every year, excellent world-class musicians have been appearing on the Baltic Sea Island of Usedom for twenty years, setting musical signs for peaceful coexistence within Europe.

The Peenemünde Concerts were initiated by the Usedom Music Festival, the North German Radio (NDR) and the Historical-Technical Museum Peenemünde. They fuel a special mission: where formerly rockets were designed and tested, now there is applause for music. During the “Third Reich”, the research station of the German Army and Air Force in Peenemünde was involved in developing “secret weapons” – including the so-called Aggregat 4 (also known as “V2”), the world’s first large-scale rocket. It brought death to many thousands of people, as well as the first successful launch of a space rocket. Peenemünde exemplifies the ambivalence of the development and use of cutting-edge technology like few other locations. Today, Peenemünde hosts a museum in the power station, cultural events, special exhibits, project days, workshops and work camps, and has become a venue for international encounters and peace pedagogy. The Peenemünde Concerts are unique on the German museum and festival landscape. They focus on humanity’s great themes – war and peace, freedom, love and life – themes the ambivalent location dictates. The internationally acclaimed concert series was launched on September 28, 2002: under the baton of Mstislav Rostropovich, more than 250 musicians performed Benjamin Britten’s War Requiem in the turbine hall of the former power station. Ever since, world-famous conductors have been continuing the series: Krzysztof Penderecki (2003), Christoph von Dohnányi (2004), Esa-Pekka Salonen (2005), Alan Gilbert (2006), Andris Nelsons (2007), Thomas Dausgaard (2008), Christoph Eschenbach, Neeme Järvi (2010), Kurt Masur (2012 and 2013) and Neeme, Paavo und Kristjan Järvi (2013) represent the high musical standards of the Peenemünde Concerts.

Further information and ticket purchases can be obtained by calling (+49) 38278/34647 or online at www.usedomer-musikfestival.de, www.usedom.de as well as from numerous Tixoo ticket sales offices in Germany, Austria, and Switzerland. 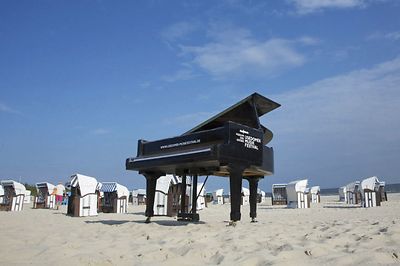