With the project LUCERNE FESTIVAL ARK NOVA, the LUCERNE FESTIVAL, one of the most prominent music festivals in Switzerland, lends it support to Matsushima City, Miyagi Prefecture, a city that was struck by the unforgettable earthquake and tsunamis on 11 March 2011. LUCERNE FESTIVAL ARK NOVA is the first of its kind in Asia. In preparation of this event a mobile concert hall made of balloon-like material was developed. Through the cooperation of Arata Isozaki, a world renowned Japanese architect, and Anish Kapoor, a British sculptor born in India, this music hall was created. From 27 September until 13 October, world class music and performance and traditional local performance art will come together as one.

Since the ARK NOVA Hall is a mobile hall, it can travel around the disaster areas and bring people together creating interactions. A music festival where people are touched and encouraged by the power of music and culture will unfold here.

Michael Haefliger, Artistic and Executive Director of LUCERNE FESTIVAL, states: “The images of 11 March 2011 have left their mark on all of us. Since we at LUCERNE FESTIVAL have maintained a very close relationship to Japan for many years, I felt a strong desire to make a contribution to overcoming the consequences of the catastrophe, within the scope of what we have to offer. With the LUCERNE FESTIVAL ARK NOVA Project we hope to give the people who are living with this situation something more than everyday pleasure. Combining different arts and cultures, this project is a fascinating symbiosis of architecture, design, folkloristic and classical music as well as music education. The impressive concert hall will not only serve as a performance platform for high-class artistic projects, for which there is currently no infrastructure in the area, but should also become a place of encounter and of inspiring creativity, and thus help to develop and promote the cultural side of the region.”

Anish Kapoor is one of the most influential sculptors in the contemporary art world. Over the past thirty years, he has held solo exhibitions at various art museums in the world. In 2009, he became the first living artist to have a solo exhibition at the Royal Academy of Arts in London. In 2010, he held his solo exhibitions at NGMA in Delih and Menboob Studio in Mumbai, followed by large scale installations at Fabricca del Vappore in Milan and Grand Palais in Paris. He has participated in a great number of group exhibitions in the world. He participated in the Paris Biennale in 1982 and the Venice Biennale in 1990 as the British representative.

Kapoor said: “I am honoured to have been asked to design Ark Nova for the Tohoku area. The structure defines a space for community and for music in which colour and form enclose. I hope that the devastation can be overcome by creativity. Music can give solace and bring community together and in so doing can help us to see we are not alone.”

Pictures of the ARK NOVA concert hall can be found here. 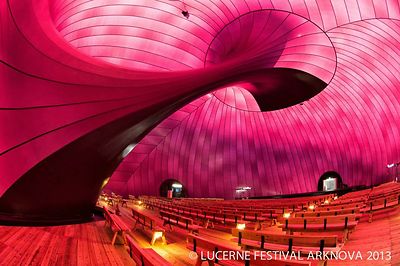