The Decisive Deal: a Cultural Pact for Europe – A Soul for Europe calls for ideas

What concrete developments and changes would you propose for the political agenda of the EU relating to culture, values, democracy, and citizenship? What questions would you ask the political candidates in the run up to the 2014 elections? “A Soul for Europe” and the Cultural Coalition for a Citizens’ Europe are inviting citizens to work together with their elected representatives in its action towards the 2014 European elections: the Decisive Deal.

The 2014 European elections will be different from years past, with each political party of Europe nominating candidates for President of the European Commission.

“A Soul for Europe” and the Cultural Coalition for a Citizens’ Europe are inviting these candidates to debate critical European issues with artists and intellectuals at the Berlin Conference 2014 (3 March 2014). In this context, we invite you to tell us what you would like to see on the working agenda of the Europe Union for the next 5 year term.

To jumpstart the dialogue, we have developed a working document under the title “Decisive Deal” and invite you to give feedback on the ideas laid down in this draft pact. These initial proposals are based on the results of discussions with citizens that took place in 2012/13 across Europe, with two more events coming up: the Amsterdam Conversations 2013 (29 November 2013) and Brussels Conversations 2013 (14 December 2013). The discussion series will culminate at the Berlin Conference 2014 after which the proposals will be formalized into Resolutions to be brought before in the European Parliament.

We are looking forward to your ideas for the pact and your feedback on our proposals!

We invite you to participate in our events and/or to engage in the discussion and share your comments online on the “A Soul for Europe” website or by email to info@houseforculture.eu. All comments can be made public on the blog if you agree. Any input is more than appreciated. Please don’t hesitate to contact us in case of questions.

For more information, visit the website at www.asoulforeurope.eu, check out the media section for photos, videos and documents of the events and current topics, and get in touch with on Facebook and Twitter. 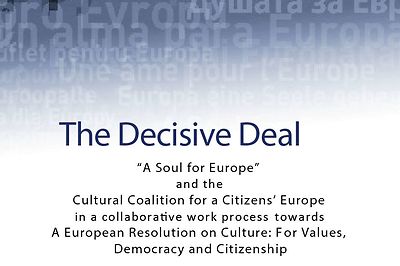