The European House for Culture (EHfC) and its partners are organising the Brussels Conversations 2013 to take place in Brussels on Saturday 14 December from 9:30-15:00. The 2013 edition will bring together innovative and influential individuals to discuss The Decisive Deal, a process to define culture’s contribution to Europe in the context of the European elections taking place 22-25 May 2014. The Brussels Conversations 2013 will be an invitation-only roundtable discussion bringing together 50 inspiring citizens, and will be hosted by De Munt/La Monnaie in Brussels.

What concrete developments and changes would you propose for the political agenda of the EU relating to culture, values, democracy, and citizenship?

What questions would you ask the political candidates in the run up to the 2014 elections?

Over the last year, “A Soul for Europe” (ASfE) has built a Cultural Coalition for a Citizens’ Europe (CCCE), a network of partner organizations and individuals working to create a Europe of citizens through one of Europe’s most valuable resource, its culture. The European House for Culture and the CCCE are now embarking on a programme towards the 2014 European elections: the Decisive Deal.

The 2014 European elections will be different from years past, with each political party of Europe nominating candidates for President of the European Commission. “A Soul for Europe” and the Cultural Coalition for a Citizens’ Europe are inviting these candidates to debate critical European issues with artists and intellectuals at the Berlin Conference 2014 (3 March 2014).

To jumpstart the dialogue, we have developed a working document under the title The Decisive Deal: A European Resolution on Culture, for Values, Democracy and Citizenship. The Brussels Conversations will enter into a deep discussion about this document. At the same time, we invite all citizens to give feedback on the ideas laid down in this draft pact. These initial proposals are based on the results of discussions with citizens that took place in 2012/13 across Europe, with two more events coming up: the Amsterdam Conversations 2013 (29 November 2013) and Brussels Conversations 2013 (14 December 2013).

The members and friends of the European House for Culture and the Brussels Conversations 2013 have an important role to play in this process: we will review and discuss the content that the Cultural Coalition for a Citizens’ Europe has gathered over the past 18 months formulate proposals to serve as the topics for the debate at the Berlin Conference 2014. The Berlin Conference on 3 March 2014 will formalise the proposals into suggestions to be brought before in the European Parliament.

While this is an invitation only event, should you be interested in participating you can express your interest to info@houseforculture.eu by 1 November. Please write us stating your motivation for attending and how you imagine yourself contributing to the discussion.

As a close partner of the European House for Culture, the European Festivals Association (EFA) will link its own activities to the process: The 2014 EFA General Assembly and Conference (26 February – 1 March) will take place in Sarajevo, Bosnia and Herzegovina, at the invitation of the International Festival “Sarajevo Winter”, as 2014 marks 100 years since the outbreak of the First World War. At this occasion, EFA will organise the Sarajevo Conversations in partnership with the Cultural Coalition to bring discussions from Brussels to Sarajevo and finally to Berlin. Furthermore, EFA will involve its Board and its members in the process.

The Brussels Conversations 2013 is produced in partnership with the Marcel Hicter Association, ENCATC, European Union National Institutes for Culture (EUNIC), European Festivals Association (EFA), Access to Culture Platform, Felix Meritis, and “A Soul for Europe” with the support of the Citizenship Programme of the European Union. 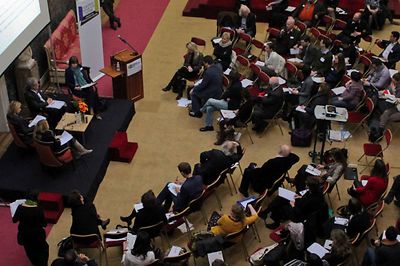