On 17 November 2013, the Krzysztof Penderecki Festival started in Warsaw. The celebration of contemporary music organised at the occasion of the composer’s 80th birthday will be honored by the presence of world-renowned artists. “His remarkable composing talent and artistry contributed to the enrichment of Polish and European musical life,” says Bogdan Zdrojewski, Minister of Culture and National Heritage. “With the course of time the Master’s musical language has been changing, but the authenticity of his compositions remained intact. His works are performed and recorded all around the world, being an inspiration to new generations of artists,” the Minister emphasises.

The Krzysztof Penderecki Festival lasts seven days. From the stages of the Warsaw Philharmonic, the Teatr Wielki – Polish National Opera and the Royal Castle we will hear his chamber, symphonic, choral and oratorian music: from the youthful Violin Sonata No. 1 to experimental Strophes, Psalms of David or the moving Threnody to the Victims of Hiroshima; from the monumental Seven Gates of Jerusalem written for the occasion of the 3000th anniversary of the holy city, to the moving Credo, which is a unique profession of faith of the composer.

Through this incredibly rich oeuvre of Penderecki we will be guided by world-renowned artists: Yuri Bashmet, Anne-Sophie Mutter, Lorin Maazel, Valery Gergiev, Charles Dutoit, Jerzy Maksymiuk, Jacek Kaspszyk. But this is only a part of over 50 names of conductors and soloists who accepted invitations to the jubilee festival. They will be accompanied on the concert stages by great orchestras: Sinfonia Varsovia, Warsaw Philharmonic Symphony Orchestra, Polish National Radio Symphony Orchestra in Katowice, Aukso Orchestra, the Polish Sinfonia Iuventus Orchestra, as well as chamber ensembles, choirs, singers and actors.

The festival began in a very intimate atmosphere. The programme of the inaugural concert (17 November) included maestro Penderecki’s chamber works: 3 Miniatures for Clarinet and Piano, String Quintet, Suite for Cello Solo and Sextet for Clarinet, Horn, String Trio and Piano. A real firework was the cast of this concert, as some of the most outstanding artists from Poland and abroad have been invited to take part. Miniatures for Clarinet and Piano was performed by the duo Darko Brlek (clarinet) and Marek Bracha (piano), and the String Quintet in the interpretation of the fantastic Dafô String Quartet with Jerzy Dybała (double-bass) and Suite for Cello Solo presented by Danjulo Ishizaka. Yet, one of the biggest heroes of the evening was the Russian viola virtuoso, or rather, the world king of this instrument – Yuri Bashmet. In the performance of the Sextet Bashmet was accompanied by: Michel Lethiec – clarinet, André Cazalet – French horn, Julian Rachlin – violin, Maja Bogdanovic – cello, and the extraordinary Irish pianist Barry Douglas.

The Krzysztof Penderecki Festival is a birthday gift organised by the composer’s wife Elżbieta Penderecka and run by her Ludwig van Beethoven Association. “This year we are celebrating with my husband 50 years from when we first met and 40 years of marriage. It is a long time. And this in a way authorises me to say that I know the artistic output of Krzysztof Penderecki. I know him as a composer and as a person. I would like to give him a birthday which, in my opinion, he deserves with all that he has accomplished,” explains Elżbieta Penderecki.

“I keep raising the bar higher and higher for myself and I don’t always manage to jump over it, so sometimes I walk under. I have some works up my sleeve which I would like to finish and I need at least 20 years in order to do it. This is why I hope that I will have a chance to celebrate yet another round anniversary,” the composer admits. 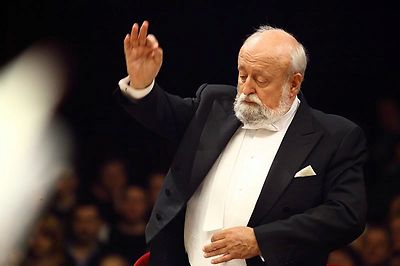