The Menuhin Festival Gstaad has successfully established a number of academies in the Festival programme over the past years. The Vocal Academy with Silvana Bazzoni-Bartoli is already celebrating its fifth anniversary this year; the Piano Academy with Andras Schiff is in its second year; and the String Academy with instructors Igor Ozim, Ettore Causa and Ivan Monighetti is taking place for the first time this year. During the coming weeks a Baroque Academy with Maurice Steger also will be inaugurated this season. From 7-27 August 2014 conductor Neeme Järvi, who regularly has directed the Gstaad Festival Orchestra, will lead a Conducting Academy for the first time.

The Conducting Academy will take place for three weeks in Gstaad and offers 20 young conductors the opportunity to work and learn in a professional environment. The Gstaad Festival Orchestra will act as the partner to Neeme Järvi and the 20 students during the academy, performing three Academy Concerts with the participants as well as a concert under the direction of Neeme Järvi in the Festival Tent as part of the Festival programme.

The expansion of the Gstaad Academy with this major project means that the Menuhin Festival Gstaad will be able to offer young musicians and interested listeners the most important and the largest Summer Academy in Europe. All of the master classes are open to the public. The Festival will grow in artistic diversity with this addition and provide exciting insights into the pedagogical aspects of conducting and the promotion of talented young musicians. The Conducting Academy has as its goal the support and stimulation of promising young conductors, affording them a stage to make themselves known to audiences, experts and the press. Part of the repertoire for the Conducting Academy will consist of commissioned works or music from the 21st century that will be studied and prepared in the presence of the composers.

The closing date for applications is 10 January 2014. 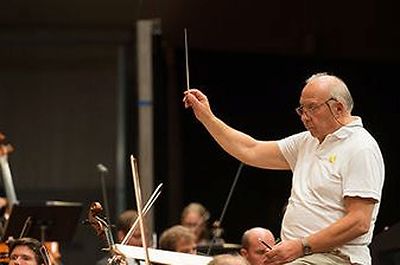