Beirut set to enjoy the classical strains of Christmas

[November 28, 2013 12:09 AM; By Chirine Lahoud; The Daily Star] BEIRUT: The Christmas season is an elastic thing. All sorts of people have an interest in stretching out the celebrations to make them last as long as possible. By now tinsel and fake snow have been applied to retail displays worldwide while canned seasonal music is piped through PA systems. The elasticity need not be commercial of course. Witness “Beirut Chants,” the city’s cycle of seasonal music performances. Organizers have announced that the event’s sixth season will go ahead on schedule, unfazed by the simmering security concerns that have prompted so many cancellations in the 2013 cultural calendar. Indeed, the program is far more diverse than the term “chant” would suggest.

The concert series begins Dec. 1 at Gemmayzeh’s St. Maron Church with a performance featuring the Antonine University Choir and Beirut Chants Orchestra, all under the baton of Joanna Nachef – the first female conductor in the Middle East.

The program isn’t restricted to choral performances, and includes appearances by noted soloists – both vocalists and instrumentalists.

Over the course of the event’s three-week schedule, St. Maron will also host performances by Russian cellist Boris Andrianov and pianist Katia Skanavi on Dec. 9. The church will resonate with the music of German organ virtuoso Markus Karas on Dec. 12, while choral ensemble La Chanterie de Beyrouth promise to perform a program of undisclosed seasonal favorites on Dec. 22.

U.K. pianist Aleksander Szram will collaborate with Lebanese flautist Wissam Boustany on Dec. 7. Another duo performance that is not to be missed, on Dec. 17, features Italian Francesca Leonardi on the piano and countryman Francesca Dego on violin.

Piano-lovers will be pleased to learn that Tatiana Primak-Khoury, the artist-in-residence at Balamand University, will be coming down to St. Louis Capuchin on Dec. 10 for a solo recital. Her program will be a tribute to Lebanese composers.

On Dec. 2, bass-baritone Shady Torbey will combine his ample talents with pianist Kristina Raczynska for a duet show.

St. Elie Greek Catholic Cathedral will host a pair of concerts – that of the St. Stephanos Melode Choir on Dec. 15, and Lebanese soprano Nadine Nassar on Dec. 18.

Of course, no program of classical music would be complete without the Lebanese Philharmonic Orchestra. On Dec. 20, Lebanon’s favorite Lebanese orchestra will mount the altar of St. Joseph Church, Jesuit, to accompany an ensemble of solo vocalists – soprano Artemisa Repa, mezzo-soprano singer Jose Maria Lo Monaco, and bassist Carlo Malinverno.

She will be supported in this program of classical hymns and popular folk songs by the La Sagesse St. John Children’s Choir under the direction of Father Toufic Maatouk and choir master Nelly Maatouk.

The Beirut Chants Festival will take place in several venues in Beirut from Dec. 1-23. For more information, please visit www.beirutchants.com.

A version of this article appeared in the print edition of The Daily Star on November 28, 2013, on page 16. 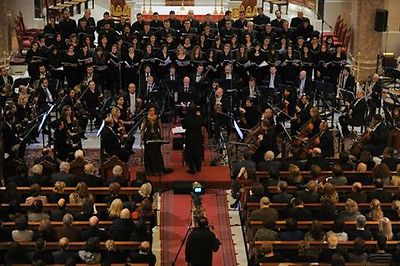