On 9 December 2013 in Milan, Italy, during the second General Assembly of the “New Narrative for Europe” project, a group of European artists and intellectuals involved in the initiative released a statement in support of the pro-European movement in Ukraine. Kathrin Deventer, Secretary General European Festivals Association (EFA), and Paul Dujardin, Director General Bozar, are among the more than 200 signatories.

Dear friends in the streets of Kiev and other cities,

We European citizens, thinkers, artists and scientists who gathered at the General Assembly in Milan on 9 December convened by European Commission President Jose Manuel Barroso under the new narrative for Europe are following the events in Kiev with great attention. We extend our warm sympathies in your fight for freedom and democracy in Ukraine. Your boldness and perseverance are to us a clear sign that your country belongs to the family of free and democratic countries of the united Europe.

We want to ensure you that you already hold such a place in our hearts.

Your struggle, your courage and your long-suffering are important to us. We understand our support as a binding obligation to support your pro-European efforts. We would very much like to see a continuation, furthering and deepening of the process of European integration. We, as people who gathered under the respect and continued pursuit of high values of freedom, democracy, the rule of law, culture and equality would like to wish you courage and support in your struggles for these, our common values. Our task, as Europeans, is not only to take care of the political, economic and administrative interconnectedness but also for the moral climate, to which you now contribute so bravely, so that the European Union would become a welcoming home for all European citizens. We stand in support of your political prisoners, who are fighting for freedom.

The “New Narrative for Europe” is a project proposed by the European Parliament and implemented by the European Commission following the call Commission President José Manuel Barroso made in his State of the Union address in 2012. The goal of the initiative is to invite artists, writers, thinkers, scientists and cultural practitioners to come up with a vision of Europe that can reconnect European citizens to the process of building the European Union in the present and in the future.

Read the statement of President Barroso on the current situation in Ukraine here. 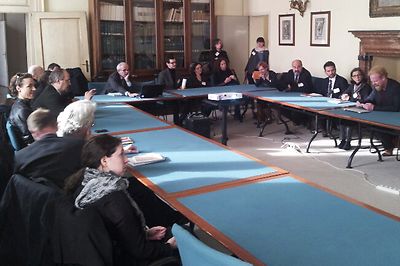