The Brussels Conversations 2013, organised by the European House for Culture (EHfC) and its partners, will take place on Saturday 14 December from 9:30-15:00 at De Munt/La Monnaie in Brussels. The 2013 edition will bring together some 50 innovative and influential individuals from the cultural sector to discuss The Decisive Deal, a process to define culture’s contribution to Europe in the context of the European elections taking place 22-25 May 2014.

Over the last year, “A Soul for Europe” has built a Cultural Coalition for a Citizens’ Europe (CCCE), a network of partner organisations and individuals working to create a Europe of citizens through one of Europe’s most valuable resource, its culture.

During the Brussels Conversations, participants will be asked to concentrate on two key questions:

In the run-up to the meeting, participants were invited to provide input to The Decisive Deal: A European Resolution on Culture, for Values, Democracy and Citizenship, a working document developed by “A Soul for Europe”. During the Brussels Conversations, participants will suggest their own agenda points that they would add. The European House for Culture, “A Soul for Europe”, and the partners involved aim to develop a list with the essentials to be presented to the elected leaders following the 2014 European elections.

The initial proposals are based on discussions with citizens that took place in 2012/13 across Europe. The most recent event on 29 November, the Amsterdam Conversations 2013 organised by Felix Meritis, focused on: how can we overcome the growing loss of trust in our democratic infrastructure and what Europe we want in the future? Speakers included Paul Scheffer (writer, Professor of European Studies, Tilburg University), Robert Menasse (writer, author of “Der Europäische Landbote”), Ivan Krastev (political scientist, author of In Mistrust We Trust), and Kathrin Deventer (Secretary General European Festivals Association).

All content that the Cultural Coalition for a Citizens’ Europe has gathered over the past 18 months will serve as the topics for the debate at the Berlin Conference 2014 on 3 March. To realize our goal of a cultural Europe of citizens and to create ties with the European Union at a time of important institutional changes in 2014, leaders from the European political parties will be brought together in Berlin to discuss their visions for the future of Europe with Europe’s leading artists and intellectuals.

As a close partner of the European House for Culture, the European Festivals Association (EFA) will link its own activities to the process: The 2014 EFA General Assembly will take place in Sarajevo, Bosnia and Herzegovina, at the invitation of the International Festival “Sarajevo Winter”. At this occasion, EFA will organise the Sarajevo Conversations (26/27 February 2014) in partnership with the Cultural Coalition to bring discussions from Brussels to Sarajevo and finally to Berlin. Furthermore, EFA will involve its Board and its members in the process.

An invitation-only event, the Brussels Conversations 2013 is co-produced with “A Soul for Europe” and the European Festivals Association (EFA), in partnership with the Access to Culture Platform, Marcel Hicter Association, ECSA – European Composer and Songwriter Alliance, ENCATC, European Union National Institutes for Culture (EUNIC), and Felix Meritis. 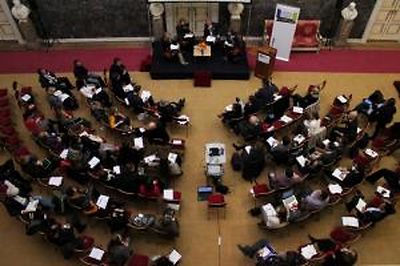