In autumn two more Ateliers will take place: BEIRUT 2014 in Lebanon and POZNAŃ 2014 in Poland. The Beiteddine Art Festival and The Festival Academy hope that the situation in Lebanon and the region will allow the Atelier to take place in 2014, as the edition envisioned for 2013 had to be postponed. The calls for application for both Ateliers will be launched in 2014.

In 2015, the Atelier for Young Festival Managers will travel for the first time to Africa, to take place in Kampala, Uganda from 20 to 27 September 2015, organised in collaboration with the Bayimba International Arts Festival.

Furthermore, the Festival Readings, another initiative by The Festival Academy in the field of festival programming and management, will take place in 2014. During three intense days, public lectures on artistic festival management will allow participants to gain professional and practical behind the scenes insights. Dates and places will be announced in 2014.

Interested festival managers are invited to find the latest news on The Festival Academy at www.TheFestivalAcademy.eu and on the Atelier for Young Festival Managers at www.atelierforyoungfestivalmanagers.eu or to contact us at atelier@efa-aef.eu. 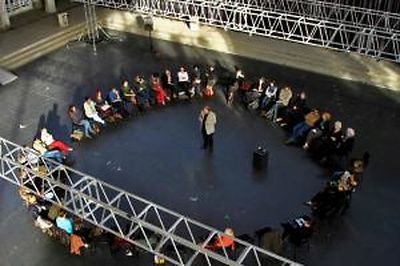