From 26 February until 1 March 2014, the General Assembly of the European Festivals Association (EFA) will be held in Sarajevo in Bosnia and Herzegovina, and hosted by the International Festival ”Sarajevo Winter”, which will celebrate its 30th anniversary in 2014. This year, it will comprise the Sarajevo Conversations on 26/27 February 2014.Some 120 festival directors from all over the world will attend the annual EFA gathering, for the first time in the Association’s 60-years history hosted in Sarajevo. 2014 marks a historic year: it will be 100 years after the outbreak of World War I; the 60th anniversary of the European Cultural Convention; 30 years after the Winter Olympics in Sarajevo; and 10 years after the 2004 EU enlargement, the largest single expansion of the EU.

Today, we are at a crossroads to defend and define our future which continues to be a project of peace and solidarity. To keep this peace project alive, it needs our every-day efforts. A new paradigm is needed, that goes beyond words but reaches firm commitments. A democratic world based on cultural values and justice should offer a space that ensures the well-being of all of its citizens. We have to ask ourselves: How do we want to live together in our time and space? What role do festivals play to contribute to re-conceptualising and enhancing democracy, and freedom of citizens? Especially learning from our surrounding in Sarajevo, how can we contribute to the understanding that peace and community are a privileged construction, not a natural state of human existence? How can festivals build bridges and strengthen communities?

The 4-day programme invites festival directors to have an inspiring time in Sarajevo. For many directors, it will be the first time to visit the capital of Bosnia and Herzegovina, thus an opportunity to get to know more about its artistic, cultural, social life, its history as well as today’s challenges. During inspiring discussion rounds, a series of interest group meetings, the formal General Assembly, meetings of The Festival Academy, as well as networking moments, they will have the chance to exchange on what is at stake in the world of festivals.

The opening takes place on 26 February at the House of Army in the presence of local and international cultural and political representatives, such as: Ivica Saric, Minister Canton of Sarajevo; Darko Brlek, EFA President; and Ibrahim Spahic, Director Sarajevo Winter Festival. An inspiring conversation between Tvrko Kulenovic, Academic, Chairman of the Board International Festival Sarajevo “Sarajevo Winter”, and Nele Hertling, Member of the Strategy Group “A Soul for Europe”, will provide food for thought. The evening will be rounded up by an artistic programme and a dinner reception.

On 27 February, the Sarajevo Conversations will take place as part of the A Soul for Europe’s Cultural Coalition for a Citizens’ Europe. Speakers and panellists will discuss the role of festivals in Europe’s future with the aim to contribute to the mission of finding a paradigm for Europe in which its citizens assume an active role and in which the importance of culture is acknowledged and better exploited. We will also look at historical events which had an impact on the characteristics of Europe and its regions today, such as the Balkans, during which festivals had a “business case for humanity” (Sir Jonathan Mills) and arts and culture an important role in reuniting citizens.

On 28 February, the formal aspects of our Association will be discussed during the General Assembly, including elections for the EFA Board. During an exciting cultural evening and after-party the flag of EFA will be handed over to the festival hosting the EFA General Assembly in 2015. 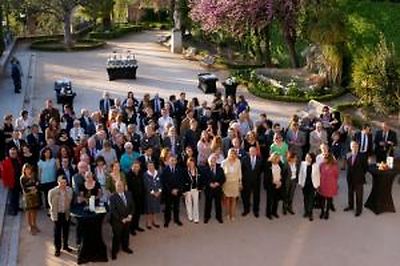