The 2014 General Assembly & Sarajevo Conversations of the European Festivals Association (EFA) took place from 26-28 February in Sarajevo, Bosnia and Herzegovina, under the title Rising to the Occasion. It was hosted by the International Festival “Sarajevo Winter”, which celebrates its 30th anniversary in 2014. 100 festival directors representing 62 festivals in 22 countries met colleagues, exchanged on what is at stake in the world of festivals all over Europe and beyond, and identified festivals’ contributions to the challenges of today’s society. One of the main outcomes: the Association elected a new Board for a 3-years term under the President Darko Brlek.

“The European Festivals Association stays ahead of change and new creative impulses needed for festivals, for a network, and for Europe. It is vital to retain the knowledge and experience that are the foundation of EFA, and at the same time dare to bring the network and its mission into a next phase. The new Board is eager to continue the successful work of the Association and to further EFA’s importance in the international cultural scene. We are looking forward to rising to the occasion together,” said Darko Brlek, EFA President.

The General Assembly was the concluding meeting of three days of intense exchanges about the creation of a Europe of citizens through one of Europe’s most valuable resources, its culture. The topic was explored during the Sarajevo Conversations with Prof. Dr. Senadin Musabegovic, Poet, Professor at University of Sarajevo, Nele Hertling, Member of the Strategy Group of “A Soul for Europe”, Jonathan May, Digital Producer London International Festival of Theatre, Amila Ramovic, Executive Director Sarajevo Chamber Music Festival, and Alumni of The Festival Academy’s Atelier for Young Festival Managers.

“The Sarajevo Conversations are part of the Cultural Coalition for a Citizens’ Europe of “A Soul for Europe”. Today’s challenges require different disciplines to work together. Culture can play a leading role in tackling these challenges by facilitating dialogue between citizens and politicians. Together with the new Board and all EFA members we will continue our joint mission in contributing to finding a paradigm for Europe in which its citizens assume an active role and in which the importance of culture is acknowledged and better utilised,” said Kathrin Deventer, EFA Secretary General. 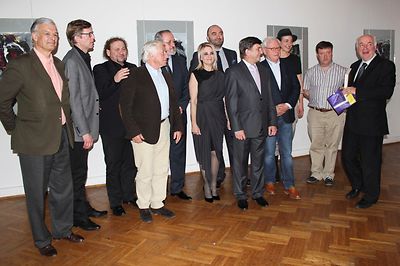