On 30 January 2014 in Brussels, the annual round table, bringing together Androulla Vassiliou, European Commissioner for Education, Culture, Multilingualism and Youth, and some 25 directors of major festivals, takes place at the initiative of the European Festivals Association (EFA). It is the fourth round table since Ms. Vassiliou took office in 2010 and continues the annual discussions with the European Commission about future strategies and policies as well as possible partnerships with festivals.

EFA’s role in facilitating dialogue between festivals and EU decision-makers has been confirmed throughout the past ten years, since EFA moved its office to Belgium in 2004 and started a series of new projects, initiatives and dynamics. The participating festival directors are eager to contribute to advancing artistic creation and European thinking through their strong vision and artistic profile. This year will be the last round table with Commissioner Vassiliou, as her term finishes in 2014 after the European elections.

It will also be the occasion to kick off the work on a new pilot project for a European Platform for Festivals in the field of culture. The project was proposed by the European Festivals Association (EFA) and will run for 2014/2015 under the title EFFE (Europe for Festivals, Festivals for Europe). EFFE aims to be the portal for professionals and citizens to arts festivals in Europe. The pilot project was originally been initiated by the European Parliament.

EFFE’s overall aims are to increase access to Europe’s diverse festivals by providing key information on Europe’s arts and cultural festivals and to enrich the festival landscape and European society by promoting trends in artistic excellence and innovation in festival production. Arts and culture are at the core of EFFE’s mission, globally promoting Europe as a vibrant space for cultural diversity, citizenship, democracy, freedom and peace.

The exclusive round table will be an opportunity to discuss this new pilot project together and to kick off the work in the presence of Mrs. Androulla Vassiliou and Mrs. Doris Pack, Chair of the Committee on Culture and Education at the European Parliament, as well as eminent festival directors from all over Europe, festival networks and associations acting as EFFE’s Festival Hubs across 28 EU Member States, the European Commission, the European Parliament, colleagues, and media representatives.

Find out more about previous round tables with Commissioner Vassiliou: 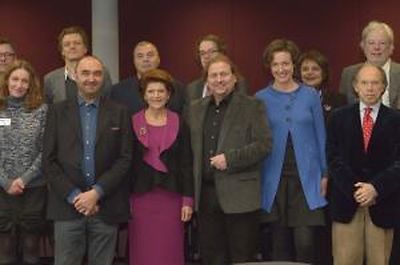