The 15th jubilee edition of the “Yerevan Perspectives” International Music Festival started on 13 January with the “Krzysztof Penderecki Days in Armenia” dedicated to the 80th anniversary of the renowned composer. More than 20 pieces were performed by leading local and international artists during four concerts at the Aram Khachaturian Concert Hall, the Cafesjan Arts Center, and the Komitas Chamber Music Hall.

More than 4,000 people enjoyed the music of the genius composer of our century, while the Maestro expressed his admiration for the high-level performers, ranking the Hover Chamber choir as “the best in the world”. Remarkable also were the performances of the Armenian Philharmonic Orchestra, and the State Youth and National Chamber Orchestras. The Penderecki Days in Armenia included fantastic performances of Darko Brlek (clarinet) and Massimo Mercelli (flute).

A recital of Yelena Bashkirova took place on 2 February at the Aram Khachaturian concert hall. On the programme were Liszt, Albeniz, Ustwolskaya, and Tchaikovsky.

One of the highlights of the 15th jubilee edition of “Yerevan Perspectives” will be the concert of the Staatskapelle Berlin with Daniel Barenboim on 13 May. 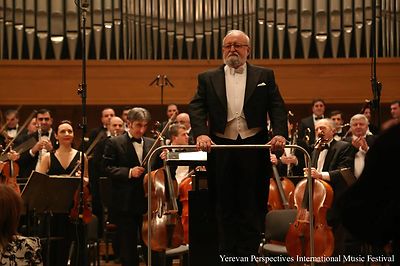