[PRESS RELEASE; Brussels, Belgium, 27 March 2014] The Festival Academy’s next Atelier for Young Festival Managers, the training programme initiated by the European Festivals Association (EFA), will take place in Edinburgh, UK 3-10 April 2014. Hosted by the Edinburgh International Festival (EIF), it will bring together 52 young festival managers from 28 countries and 9 renowned festival directors from all over the world who will share their experiences and visions. Public events include the official opening ceremony with a presentation by longstanding BAM Artistic Director Joseph V. Melillo and a closing session with renowned theatre critic and columnist Joyce McMillan.

The Atelier for Young Festival Managers focuses on the artistic aspects of festival management, represented by the Atelier motto coined by presenter and former director of the Avignon Festival Bernard Faivre d’Arcier “The true role of a festival is to help artists to dare, to engage in new projects.”

“The Atelier provides space for training and exchange. It is about formulating experiences and passing on knowledge to the next generation of festival makers: thematically focusing on the very essence of arts festivals - the art and the artist. It connects ambitious international cultural workers and contributes to the development of the festival and cultural sector,” said Atelier Coordinator Hugo De Greef.

“We are very much looking forward to hosting some of the most talented festival managers of the future in Edinburgh in 2014. As one of the world’s leading festival cities and a cultural destination year round, Edinburgh provides the perfect backdrop against which to explore aspects of festival management, potential future challenges and opportunities, and an ideal setting in which to make connections with a range of globally active cultural contributors who will help shape our shared future,” said Sir Jonathan Mills, Festival Director and Chief Executive of EIF.

On Thursday 3 April 2014 at 17:45 at the City Chambers the Atelier will be opened by Bailie Elaine Aitken, City of Edinburgh Council, and Laura Mackenzie-Stuart, Creative Scotland. Sir Jonathan Mills and Kathrin Deventer, EFA Secretary General, will welcome the Atelier group. Joseph V. Melillo will kick off the Atelier with a presentation setting the tone for 7 days of intense discussions and inspiring exchanges which will shape the careers of the Atelier participants. The Atelier EDINBURGH 2014 will close with a public session on Wednesday 9 April 2014 at 18:00 at The Hub, including a lecture by theatre critic and columnist Joyce McMillan.

If you would like to attend the public events, please RSVP to Niall Heseltine (EIF), by Wednesday 2 April 2014 (contact: niall.heseltine@eif.co.uk). A detailed programme and a comprehensive press kit will be available online; interviews can be arranged.

“The Atelier offers a unique opportunity for young curators and festival managers to meet and to share knowledge and experiences. Moreover the Atelier offers life-long learning and cooperation with its ever-growing network of Alumni of The Festival Academy’s Atelier building on and sustaining the relations and experiences initiated at the Atelier,” said EFA President Darko Brlek.

The Atelier for Young Festival Managers EDINBURGH 2014 is set to continue the success of previous editions held in Görlitz, Germany (2006), Varna, Bulgaria (2009), Singapore (2011), Izmir, Turkey (2011) and Ljubljana, Slovenia (2012). Latest news and more information on presenters and participants can be found at www.TheFestivalAcademy.eu or www.facebook.com/AtelierForYoungFestivalManagers.

The European Festivals Association (EFA) is the umbrella organisation for festivals across Europe and beyond representing 102 festivals, national festival associations and cultural networks from 41 countries. EFA initiated the Atelier for Young Festival Managers in 2006; since 2013 it has been organised by The Festival Academy. The Atelier EDINBURGH 2014 is hosted by Edinburgh International Festival in partnership with Creative Scotland, British Council Scotland and Institut Français Écosse. The Festival Academy and the European Festivals Association thank for their generous support: the European Commission, the Flemish Authorities and the City of Ghent. 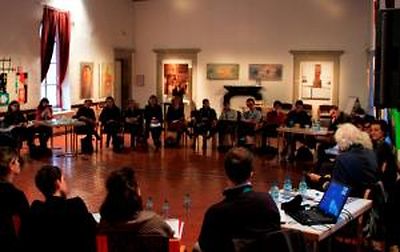