34th Budapest Spring Festival: A Celebration of Spring in Budapest

Budapest is a city of values and emotions, where festivals are as much about traditions as fascinating new surprises. The events of the 34th Budapest Spring Festival, held between 21 March and 6 April, will introduce visitors to a colourful and varied cultural scene in one of Europe’s most exciting capitals. Budapest holds countless wonders and surprises: its splendid spas, bustling city centre, the unique ruin pubs, an effervescent scene of multiculturalism, the World Heritage-listed sites, and both sides of the Danube embankment are all attractions that provide the city with an incomparable atmosphere.

In 2013, the American Condé Nast Traveler magazine’s worldwide poll named it one of Europe’s most exciting cities, and Foursquare users consider it the second most romantic city in the world. Over and above its historical and cultural values and diversity, this is also thanks to the creativity with which the city reinvents itself.

The past year has brought about important changes in the cultural life of Budapest. In addition to the beautiful, 130-year-old Opera House, and the region’s first large centre of the performing arts, the Palace of Arts – whose Béla Bartók National Concert Hall is one of the best-sounding concert venues in the world –, the freshly renovated Liszt Academy, which was founded by Franz Liszt, awaits visitors again, as does Erkel Theatre. The newly opened Budapest Music Center is one of Europe’s latest establishments dedicated to contemporary art, and also gives home to the institute of composer Péter Eötvös.

Budapest’s cultural milieu owes much to the way its artistic institutions coordinate their event offerings, and it is with reliance on these synergies that the Budapest Spring Festival has planned its programme. Besides music, theatre and dance, the fine arts and photography, film, contemporary circus and architecture will also be featured. The Festival will inhabit the entire city, with musicians, dancers and performances appearing in the most unexpected places—perhaps even involving their audience along the way.

As formerly, the 34th Budapest Spring Festival will present world-famous performers. The Vienna Philharmonic will play under the baton of Zubin Mehta. At a concert where he conducts his own ensemble, Philip Glass explores the overlap of film and opera with La Belle et la Bête (Beauty and the Beast). Two of today’s most sought-after baritones, the British Simon Keenlyside and Erwin Schrott from Uruguay, will each give a solo recital. World-famous Moldavian violinist Patricia Kopatchinskaja will be among those who pay tribute to one of today’s busiest Hungarian composers, Péter Eötvös, who has turned 70. The soloist of the BBC Philharmonic’s concert is Austrian “percussion magician” Martin Grubinger. Elena Bashkirova and the Jerusalem Festival Chamber Ensemble bring the spirit of Vienna to Budapest with a programme that selects masterpieces from different ages, from Haydn through Arnold Schoenberg and Beethoven to Alban Berg. Maxim Vengerov and the Polish Chamber Orchestra will play Mozart and Tchaikovsky, while the Capella Amsterdam sing the works of a Hungarian genius of contemporary music, György Ligeti. In the Hungarian State Opera’s production of Tosca, Cavaradossi will be sung by José Cura. Two Baroque rarities also stand out in the operatic programme, Handel’s Orlando being one of them, performed now by Jean-Christophe Spinosi and the Ensemble Matheus. The other is a modern world premiere of Jean-Philippe Rameau’s Les fêtes de Polymnie, realized in cooperation with the Centre for Baroque Music, Versailles. A thrilling spy opera is in the making about the life of the legendary Dutch dancer, Mata Hari, who was sentenced to death in 1917 by a French military court on charges of spying for Germany.

Jazz guitarists Lee Ritenour, one of the greats of the genre with a 40-year career, will appear in concert, as will Matt Bianco, who play a unique synthesis of jazz, Latin and synth pop, and will now be accompanied by the Amsterdam Concertgebouw’s Jazz Orchestra. The grande dame of fado, the Portuguese Dulce Pontes, will also be here. Extravagant showman Rufus Wainwright, one of today’s most original pop performers, will make his debut in Hungary at the Festival. Presenting a mixture of cultures and marked with a strong North African influence, the songs of the French band Lo’Jo are performed on authentic instruments. Márta Sebestyén, one of the best-known Hungarian folk singers, joins forces with Grammy Award-winner Deep Forest and others at a special film concert, playing, among other tunes, songs from The English Patient.

Considered the Monty Python of classical music, the Polish MozART Group offer a special treat with their concert. The world premiere of Infernal Ball, performed by the Yvette Bozsik Company and the Derevo Dance Theatre, is an outstanding example of this year’s co-production initiatives. Saint Petersburg’s Eifman Ballet bring a new production to Budapest, which takes a look at one of the cruellest love stories of art history, the tempestuous and tragic romance of the brilliant sculptor Auguste Rodin and his model Camille Claudel, who also became an original sculptor in her own right, thereby adding an element of artistic jealousy to their relationship. The Szeged Contemporary Dance Company and the Pannon Philharmonic offer a special blend of concert and dance, turning popular concert pieces into music for ballet. Richard Strauss’s Also Sprach Zarathustra thus becomes a stage drama, while Béla Bartók’s Dance Suite occasions a veritable whirlwind of motion. The Central European Dance Theatre presents three one-act pieces on the same night, each by a talented Hungarian choreographer who works abroad – Attila Kun, Máté Mészáros and Lóránd Zachár –, allowing them to show the most recent developments in European dance.

Since the Festival seeks to feature as many art forms as possible, the genre of contemporary circus – made popular worldwide by Cirque du Soleil, among others – will also be represented. Defining an exciting new direction, an East Central European trend in the art form, Recirquel, the first Hungarian company of contemporary circus, invite their viewers to a ball with their new show, The Naked Clown, whose scenes centre around the same question: how many layers and masks need to be removed before one’s sheer nature is revealed?

Those interested in the visual arts will find special exhibits at the Budapest History Museum, which presents a selection of Hungarian painters’ self-portraits from Florence’s Uffizi Gallery, and at the Hungarian National Gallery, where the oeuvre of Gyula Derkovits, the most original Hungarian expressionist, will be on view. Ludwig Museum awaits lovers of contemporary art, while the Capa Centre opens new exhibits of photography. 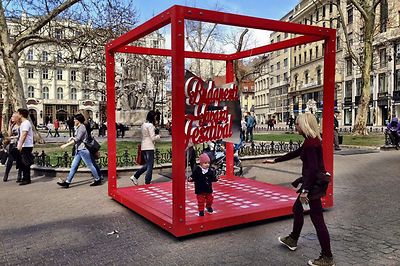