The Festival Academy’s Atelier for Young Festival Managers EDINBURGH 2014, hosted by the Edinburgh International Festival, is running from 3 to 10 April 2014 in Edinburgh (UK)! Starting today with an inspiring opening session, the Atelier, the training programme initiated by the European Festivals Association (EFA), is set to follow the success of the previous editions. Follow EFA’s communication channels in the next days: stay up-to-date and participate online!

Today, 3 April 2014, the Atelier EDINBURGH 2014 will kick off at the City Chambers. It will be opened by Bailie Elaine Aitken, City of Edinburgh Council, and Laura Mackenzie-Stuart, Creative Scotland. Joseph V. Melillo, Brooklyn Academy of Music New York, will deliver the keynote speech setting the tone for 7 days of intense discussions and inspiring exchanges which will shape the careers of the Atelier participants. Sir Jonathan Mills, Festival Director and Chief Executive Edinburgh International Festival, and Kathrin Deventer, EFA Secretary General, will welcome the Atelier group.

Under the coordination of Hugo De Greef, an intense 7-day programme has been prepared for the participants with talks, workshops, case study discussions, lectures, and a cultural programme digging into Edinburgh’s cultural and artistic life.

The Atelier EDINBURGH 2014 will close with a public session on Wednesday 9 April 2014 at 18:00 at The Hub, including a lecture by theatre critic and columnist Joyce McMillan. If you would like to attend, please RSVP to Niall Heseltine (EIF) asap (contact: niall.heseltine@eif.co.uk).

In the run-up to the Atelier we introduced all nine festival managers attending the Atelier to share their rich experiences with the next generation of festival directors. At a glance:

…can be followed on the Atelier’s facebook page. Keep an eye out! 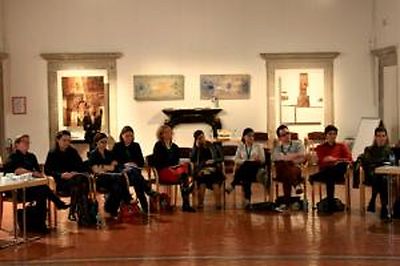